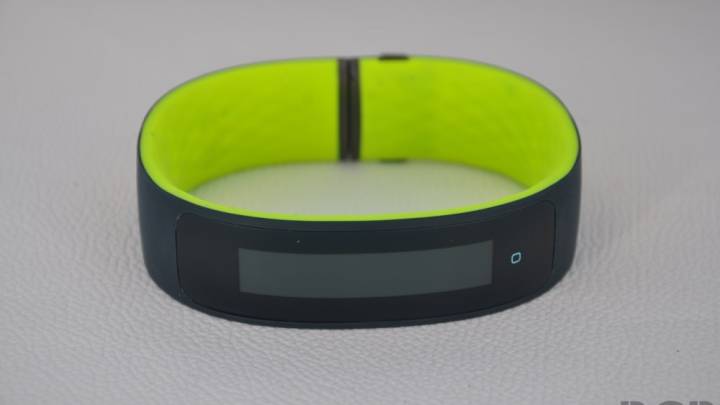 I’m not sure if there’s still room in the market for more smart health and fitness trackers, but HTC thinks that one group of consumers is being woefully underserved by the current lineup.

As HTC explained to me at a recent press event, most of the current products are for people who are trying to motivate themselves to get off the couch. People who are training for marathons or have a regimented workout routine don’t need an app to tell them that they’ve run 25 miles — they need a device that will actually do something with that information.

By partnering up with Under Armour, HTC believes that it can gain some credibility in the fitness world and offer something that no one else can.

It all starts with the Grip, HTC’s first wearable device.

The Grip isn’t a revolutionary smartband by any stretch of the imagination. It looks and feels like most other devices on the market, with a rubber body and a thin, 1.8-inch PMOLED display, but it represents an new branch and a new brand for HTC.

The most exciting thing about the Grip is its integration with Under Armour’s Record app. Since HTC decided to use an established third-party app rather than building its own, both iOS and Android users will be able to pair their devices with the Grip.

The app itself is one of the best you’ll find on the App Store or Google Play. I didn’t have a chance to try it in conjunction with the Grip, but I’ve since messed around with it and I can see why HTC chose Under Armour for this partnership.

It’s important not to think of Grip as a smartwatch. Although basic phone notifications will appear on the Grip’s display, HTC is more concerned about its ability to measure your athletic performance.

This is most evident in the menu, which you’ll swipe through on the Grip’s petite display. There’s a Workout option, where you can choose to begin measuring your activity; a 24/7 Data option to get an overview of your routine in the previous days and weeks; and there are a small selection of other apps, such as a calendar, a weather app, an alarm, a stopwatch, a timer and a music app (which syncs with your phone — there’s no real storage on this device).

As for the battery life, HTC says that the Grip will last for 5 hours with GPS tracking enabled and around 2.5 days without. It also takes about 90 minutes to charge, so you’re going to want to plan ahead if you know you want to bring the Grip on a run or to the gym.

The Grip is also lacking one feature that comes standard with many smartbands: a heart rate monitor. This seems like a strange omission, but HTC says that the technology just isn’t accurate enough to warrant its inclusion. If you want to measure you heart rate, HTC recommends that you pick up a chest strap model instead (and, conveniently, Under Armour makes those too).

The Grip will come in three sizes: small, medium and large. The standard color will be a Deep Teal/Lime. HTC hasn’t announced a firm release date yet, but you’ll be able to find it at HTC.com, Under Armour, Academy Sports + Outdoors, AT&T, Cabela’s, DICK’S Sporting Goods, Sports Authority, and Walmart this spring.