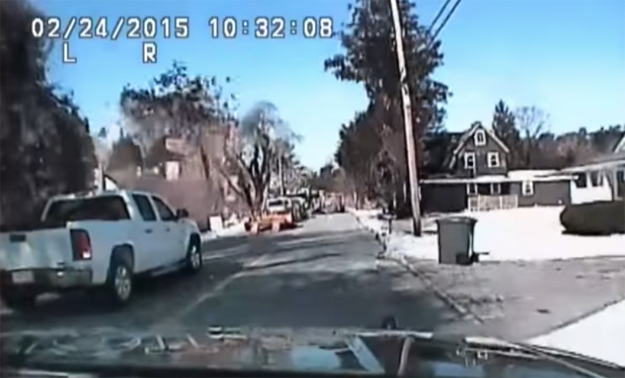 Dash-mounted video cameras in police vehicles are extremely important tools for a number of obvious reasons. They also tend to capture crazy footage from time to time, also for obvious reasons — police officers are called upon to respond to situations where danger is imminent.

Sometimes dash cameras catch things that are even crazier than normal for police officers, and that footage often ends up finding its way to the Internet. Such is the case with a massive house explosion that was caught on camera on Tuesday.

The dash-mounted camera in a police car on the scene in Stafford, New Jersey on Tuesday recorded a huge explosion in a residential neighborhood.

Asbury Park Press reports that police responded to a call just before 9:00 a.m. Tuesday morning claiming that an odor of gas was emanating from a house on Oak Avenue in the town of Stafford. After confirming a leak, the area was ordered to be evacuated and New Jersey Natural Gas workers began efforts to repair the leak.

The blast then occurred just after 10:30 a.m., and the cause of the explosion is still unknown.

“We’ve turned service off at the main so about 300 customers are without service,” a New Jersey Natural Gas spokesman told reporters. “We will be working through the night to make repairs and we expect to begin restoring that service tomorrow.”

Residents in homes as far as 10 miles from the scene reported that the blast rattled their windows. According to officials, seven employees of New Jersey Natural Gas, six firefighters and two EMS workers were injured in the blast.

The dash camera footage of the explosion is embedded below.