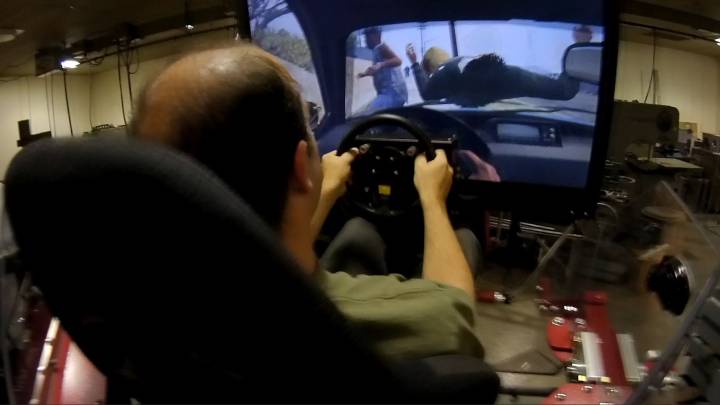 It’s been a few weeks since I last sat down and played Grand Theft Auto V. Although it’s still one of my favorite games of both this generation and last, some of the allure has worn off after completing the campaign and spending countless hours trolling other players in the robust online mode. But after seeing this video, I now know what could rope me back in.

SEE MORE: ‘Star Wars Battlefront’ is a stellar trip, but lacks the depth of its predecessors

What you just watched was a Force Dynamics employee playing GTA V while strapped into one of the company’s 401cr motion platforms — the latest iteration of its driving simulator machine.

Driving simulators with force feedback aren’t anything new, but this machine actually has a full range of motion, allowing it to “match the car’s real world orientation without washout or downscaling.” That’s why the machine tilts all the way back when the driver speeds up a vertical ramp and plummets forward as he comes back down.

The Grand Theft Auto franchise has always been lauded for its dedication to detail, but who knew the driving physics would translate this well to a physical driving simulator? Anyway, if Force Dynamics and Rockstar Games want to team up to take this wild ride on the road, you can be certain I’ll be first in line to try it out.