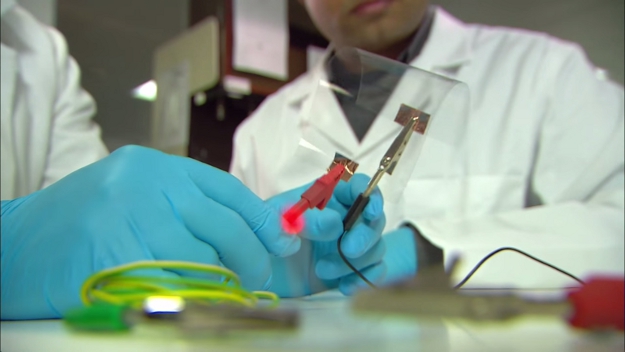 We’ve been hearing about the potential of graphene in the electronics industry for years. Just last month, Samsung announced that it had discovered a new production method that could bring graphene to commercial products even sooner. Taking advantage of the material’s flexibility, Samsung believes that flexible displays will be much more than a gimmick in the coming years.

Sadly, we haven’t yet had the chance to see that potential in action as manufacturers continue to research ways to implement the recently discovered material into phones, tablets and other devices. As graphene hasn’t yet been used in commercial applications, most of us are entirely unaware of what the “miracle material” actually consists of, and why so many companies are spending time and resources on the production of graphene.

The Loop’s Dave Mark has pointed us in the direction of a video from The One Show on the BBC, which explains graphene in terms that anyone should be able to comprehend. As the show’s host explains it, graphene is “stronger than diamond, more conductive than copper, more flexible than rubber and it’s so thin you can barely see it with the naked eye.”

If you’re at all interested in what could be one of the landmark discoveries of the 21st century, it’s worth your time to understand some of the basics of graphene.