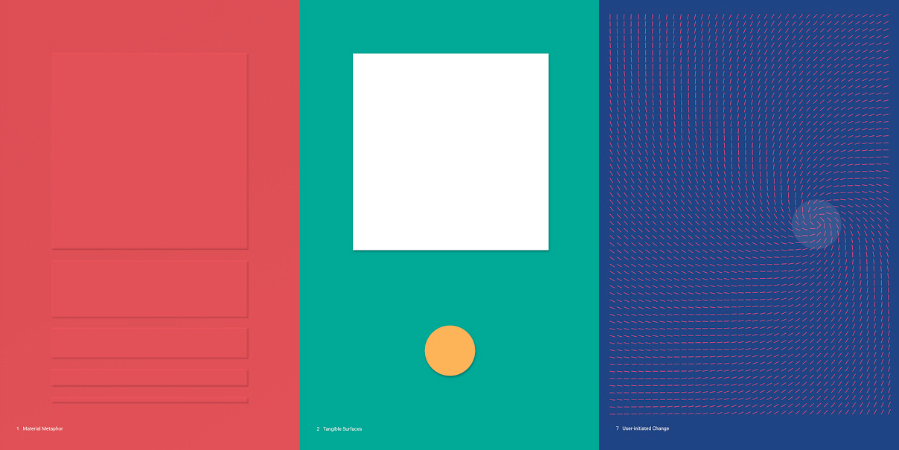 During its I/O keynote, Google announced its new design vision that will debut with Android L alongside its other Android-related initiatives, including Android Wear, Android TV and Android Auto. The new “Material Design” will also take over Google’s web properties and mobile software as the company tries to offer its customers a cohesive experience across devices and platforms. However, while the new design direction is clearly one of the most important things Google announced on stage during the show, trying to explain it apparently isn’t an easy task for the tech giant.

On its Google+ Design page, Google offered many screenshots that highlight the new design, alongside some very bizarre explanations.

Google starts things off with a simple, explanation for Material Design. “Design is the art of considered creation. Our goal is to satisfy the diverse spectrum of human needs. As those needs evolve, so too must our designs, practices, and philosophies,” the company writes. “We challenged ourselves to create a visual language for our users that synthesizes the classic principles of good design with the innovation and possibility of technology and science.”

But then things take a turn for the worst, as “tactile reality,” “magic,” the “primal parts of our brains,” “energy,” and the “prime mover” take over.

“Material is the metaphor,” Google says. “A material metaphor is the unifying theory of a rationalized space and a system of motion. Our material is grounded in tactile reality, inspired by our study of paper and ink, yet open to imagination and magic.”

“Surfaces and edges provide visual cues that are grounded in our experience of reality. The use of familiar tactile attributes speaks to primal parts of our brains and helps us quickly understand affordances.”

“Users initiate change,” Google adds. “Changes in the interface derive their energy from user actions. Motion that cascades from touch respects and reinforces the user as the prime mover.”

This almost sounds like Samsung trying to explain why plastic is still the best choice for its flagship device. “Our major aims were usability, friendliness and a more humanistic design,” Samsung Product Designer Dong Hun Kim said. “We wanted something with a pleasing feel … and better grip. If we used metal, [we felt] the designs felt heavy and cold. But with plastic, the texture is warmer. We believe users will find [the device] both warmer and friendlier. This material was also the best at visually expressing volume, better at symbolizing our design concepts.”

Luckily, not all Google explanations are so philosophical and ethereal, with most of them being fluff-free.