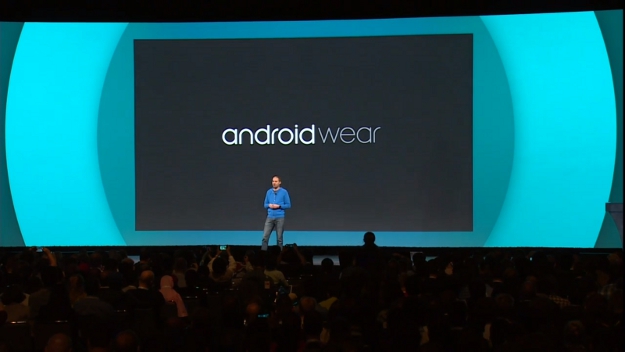 Google’s keynote presentation continues with an extensive introduction to Android Wear, the mobile platform that will power all of Google’s wearable devices. Android Wear takes the most important notifications on your phone and places them on the home screen of your smartwatch, from the local weather to flight status. The screen of the device is always-on, making notifications as accessible as possible.

Swiping up and down lets you move between notifications. Some notifications will have additional information which can be accessed by swiping to the right. Once you’ve seen a notification, you can swipe to dismiss it and it will vanish from your phone’s lock screen as well. Pressing and holding on the screen of your Android Wear device will allow you to change the watch face, of which there are several options to choose from.

You can speak to the device to set reminders. During the stage demo, the user asked his watch to remind him to check his mailbox when he got home. The watch then tells the phone to make that reminder, and it will send an alert once it detects that the user has arrived back at home.

You can make Google searches from the watch as well as take notes, but sadly the notes app didn’t appear to be functioning during the demo.

When you receive a call, a green half-circle will pop up on the side of the screen, indicating you can swipe to answer. If you’d rather ignore the call, the watches will feature a do-not-disturb mode, activated by swiping down.

Other voice commands, such as “play some music,” will play a song on your phone, but the controls will appear on the wearable device. Android Wear will also let you display a QR boarding pass at airports in case those pesky paper boarding passes were too much hassle for you. Some Android Wear devices will feature a heart-rate monitor, but all of them will have a step counter.

Google then demonstrated ordering a pizza on the brand new Moto 360, Motorola’s much hyped Android Wear debut. The Eat24 app has been seamlessly integrated into Android Wear. In fact, any app that you download on your phone will be automatically installed and updated on your wearable device. A few other familiar apps were demonstrated, including All the Cooks and Lyft.

The first Android Wear devices will ship this year, starting with the LG G Watch and Samsung’s Gear Live which will be available to order on the Google Play Store later today.