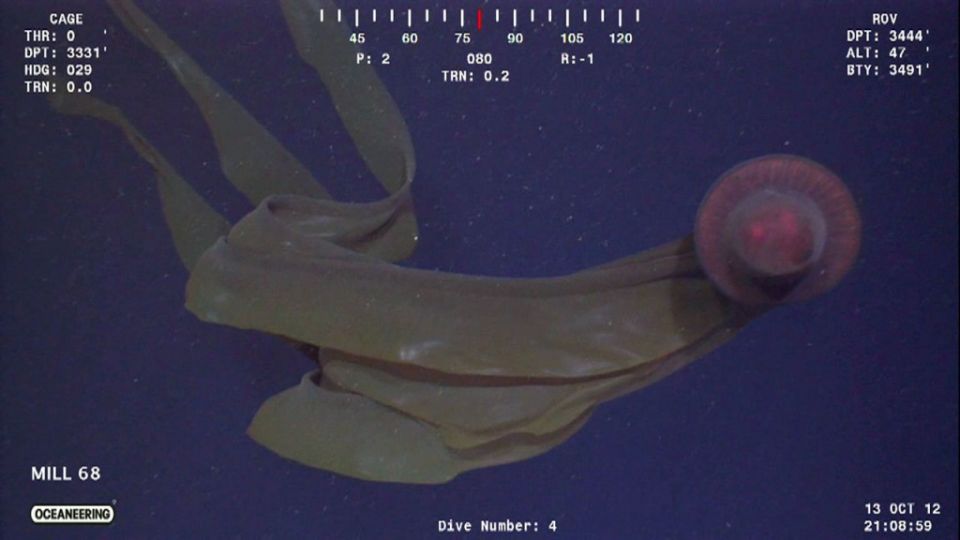 There are a lot of large and very freaky creatures lurking at the bottom of the ocean. One of them is the stygiomedusa gigantea, a gigantic species of jellyfish that can have a diameter of up to one meter and that features long, thick tentacles that can be as long as six meters. This is not something you want to encounter while swimming but thankfully it seems you have to go pretty deep into the sea to encounter one, as a new video of the creature shows.

FROM EARLIER: NASA captures super-rare photo of a red sprite from outer space

YouTube user Phillip Trudeau has posted a video of a stygiomedusa gigantea swimming 3,300 feet below the surface of the ocean in the Gulf of Mexico. A recent BBC article on the creature informs us that it’s been sighted only 115 times over a span of 110 years, which makes this video a rare treat for marine biologists.

The jellyfish itself really does look like some Lovecraftian nightmare, as its hood looks like a giant red eyeball that happens to have tentacles attached. That said, the BBC tells us that its tentacles actually don’t have stingers the way that most jellyfish we encounter do… but it’s still not something we’d ever want to see swimming alongside us.

It looks like Trudeau has taken down the original video from his YouTube page but you can still find a mirror of it at this link.