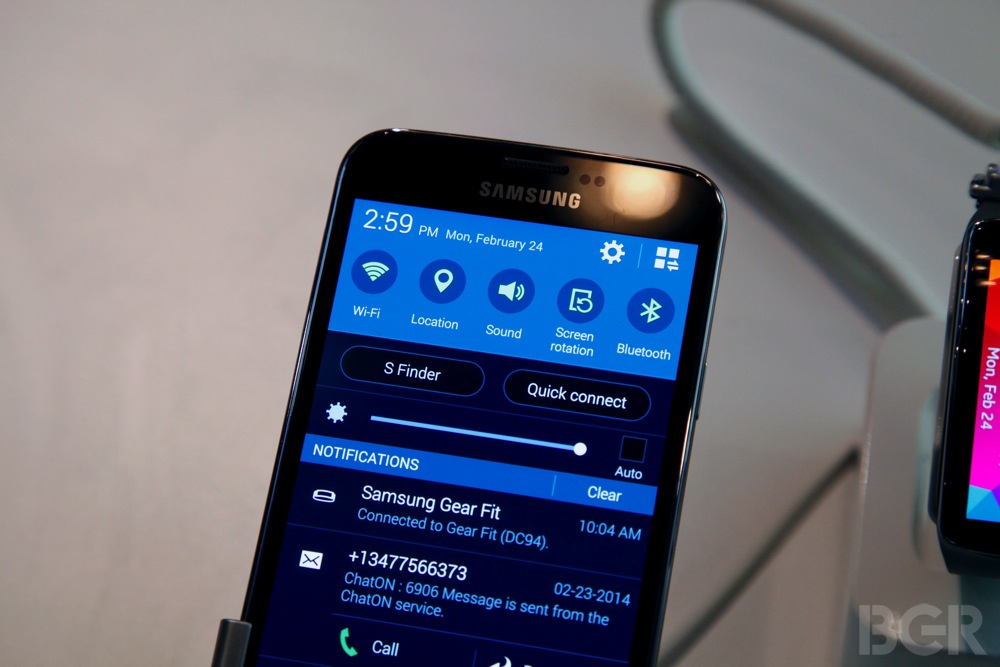 Samsung surprised the audience during its MWC 2014 Galaxy S5 press event by not excessively focusing on the TouchWiz software features built on top of KitKat. That was likely an unwanted side effect following the deal it signed with Google, which briefly fooled the audience into believing Samsung may have dialed down the bloatware built atop Android. However, various reports revealed that the Galaxy S5 firmware takes up half the storage available on the base 16GB model, which means the handset is filled with various other software features that were not detailed on stage.

CNET has taken a closer look at the Galaxy S5 software discovering various other features the company was quiet about on stage – comparatively, Samsung put on a completely different show last year, with plenty of visual demos of the Galaxy S4’s TouchWiz features.

The publication discovered a Toolbox floating menu that can be activated to include shortcuts to most used apps. “If you explore the Settings menu or the quick access settings in the notifications pulldown, you’ll notice a quiet little option called Toolbox,” CNET writes. “Toggle it on and a white dot appears, inscribing an ellipsis. Tap this and it will expand to reveal shortcuts to popular tools like the camera, voice recorder, browser, calculator, and the notes app – but you can swap for other apps.”

A Quick Connect new sharing feature “replaces a bunch of confusing individual apps that connected to your computer and your other devices through a number of channels.”

Similarly, the publication found “a ton of new camera options,” on top of the Selective Focus feature that was mentioned on stage. The phone also has “a ton of fitness apps” that were not explicitly demoed on stage, even though Samsung made sure the audience understood that health and fitness are a big part of Samsung’s future.

Samsung’s new TouchWiz overlay also offers a new user interface for Settings, the notifications tray and the quick settings menu. Other features that were mentioned on stage including Kids Mode and Private Mode were not fully demoed by Samsung.

Considering that Samsung must have been working for quite a while on the software side of the Galaxy S5 before inking the partnership with Google, it’s not surprising to see that the phone is still running an operating system that’s far from Google’s Android vision.

While Samsung hardly acknowledged the operating system in its press release or during the show, a “norm” for new Samsung Galaxy announcements, it appears that the company is trying to address that matter with the new phone, as the boot screen clearly shows that the handset is “powered by Android,” even though it may pack a lot of extra Samsung-developed software features on top of it.