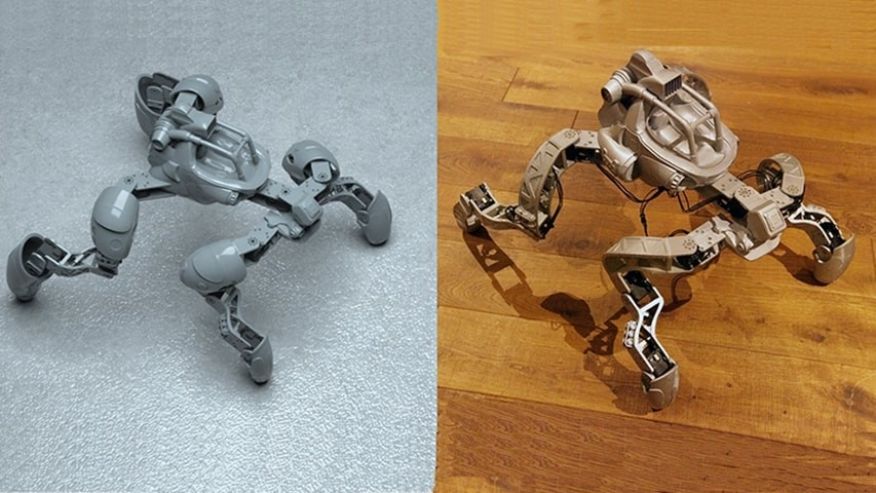 A team of researchers has come up with a system that allows anyone to make a walking robot using only a 3-D printer and an off-the-shelf motor.

The robot, which has four legs and is about the size of an adult hand, doesn’t do much more than walk across a tabletop. Users, though, can specify the shape, size, number of legs and the walking style of the robotic creature – designing it to stand upright, for example, or slink around like a lizard.

Related: Ever wanted to build your own robot? – Now you can

Markus Gross, vice president of research for Research, which came up with the system along with researchers from Carnegie Mellon University, said it makes the process of robot design simpler than ever before.

“Progress in rapid manufacturing technology is making it easier and easier to build customized robots, but designing a functioning robot remains a difficult challenge that requires an experienced engineer,” Gross said in a statement. “Our new design system can bridge this gap and should be of great interest to technology enthusiasts and the maker community at large.”

The researchers, who earlier this month presented their new tool at SIGGRAPH Asia 2015 conference in Kobe, Japan, said it could lead to more robots that are designed to cater to an individual’s needs.

“Our ambition is to make the design of compelling robotic creatures as accessible and intuitive as possible,” Bernhard Thomaszewski, a research scientist at Research, said. “Our tool allows the user to design the structure and motion of a robot while receiving immediate feedback on its expected real-world behavior.”

To produce your robot, the user first loads an initial, skeletal description of the robot. The system creates an initial sketch of the robot and places a motor at each joint position. From there, the user can edit the robot’s structure, adding or removing motors, or adjusting their position and orientation.

Related: Robots are now learning how to cook breakfast

Once you have your design, you can give it a test run on the computer and see how your robot moves. If you don’t like what appears, you can adjust the speed the way it walks. After that, the system automatically generates 3D geometry for all body parts, including connectors for the motors, which can then be sent to a 3D printer for manufacturing.

“It took us minutes to design these creatures, but hours to assemble them and days to produce parts on 3D printers,” Thomaszewski said. “The fact is that it is both expensive and time-consuming to build a prototype—which underscores the importance of a design system such as ours, which produces a final design without the need for building multiple physical iterations.”