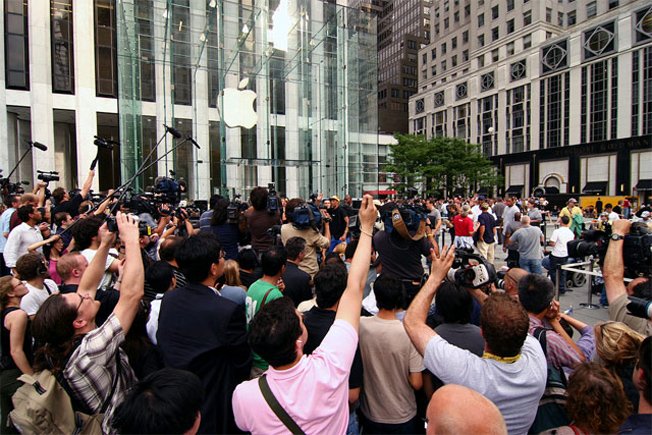 Eight years after its grand opening, the Fifth Avenue Apple Store is one of the most iconic retail locations in all of New York City. The enormous glass cube attracts tourists and locals alike — a monument to Apple’s success in recent years. The store has become so heavily ingrained in Midtown Manhattan that it’s difficult to imagine an empty plaza in front of the GM building, but that’s exactly what it was before real estate mogul Harry Macklowe stepped in.

New York Magazine shared an excerpt from Vicky Ward’s new book, The Liar’s Ball: The Extraordinary Saga of How One Building Broke the World’s Toughest Tycoons, in which Ward recounts the origin story of the now-famous Apple Store.

It all started with a “problematic plaza.” Macklowe purchased the GM building in 2003 for $1.4 billion, but was immediately faced with an issue that none of the previous owners had been able to crack — what should be done with the empty space outside of the building? Macklowe had seen how close Apple was to becoming a major player in the market once again, so he decided to take a gamble on Steve Jobs.

“He’s wearing this black turtleneck, he’s wearing black jeans … it was terrific,” Macklowe said about his first meeting with the Apple CEO. “The Apple team started talking about a flagship store that would be groundbreaking in almost every aspect. It would be open 24/7.”

The wheels were in motion, but who was the mastermind behind the cuboid design? I’ll give you three guesses, and the first two don’t count.

Dan Shannon, one of Macklowe’s frequent collaborators, recalls another meeting:

“The point of the meeting was that Steve wanted to show Harry what his vision was for that site. We got there and they had this beautiful wood model of the building and plaza, and there’s this 40‐by‐40‐foot glass cube in the middle of the plaza. And Harry knew immediately that that was the right answer.”

Be sure to check out the full piece on NYMag for more on the Fifth Avenue store.