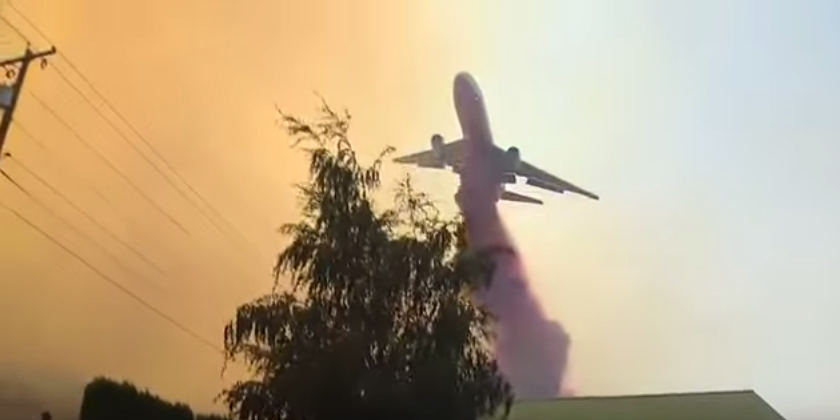 Wildfires are terrifying things, but we humans have become quite adept at fighting them. Such is the case in central Washington right now, where the town of Chelan was evacuated after wildfires proved to be too difficult to contain. However, one camera man recorded an amazing video of a 10 Tanker Air Carrier DC-10 airplane making a drop directly over him.

The plane flew over a Chelan neighborhood dumping fire retardant, Jalopnik reports. Photographer Eric Jensen was directly underneath the aircraft when the cargo was released and he got soaked in fire retardant. It’s not clear what the mix was, but the liquid had a reddish hue, as the selfie below, taken by Jensen after DC-10’s bombing run, proves.

Just got hit with a tanker of retardant. #chelanfire pic.twitter.com/jH90ywZtHV

The video of the whole experience is just 20 seconds long but goes to show how impressive this particular fire-fighting technology is. The fire retardant is made of water and a chemical component, and the mix is dropped from just a few feet off the ground.

The DC-10 is a beast of an aircraft itself, specially adapted to fight wildfires. The aircraft can carry some 12,000 gallons (45,000) of fire retardant mix, which can be released in just eight seconds.