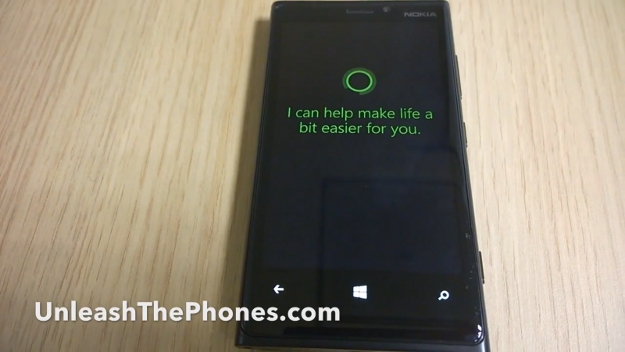 The Windows Phone 8.1 leaks continue to roll out as the Microsoft Build Developer Conference inches closer. Just a day after the reveal of Cortana’s appearance, Unleash the Phones has come forward with footage of the Windows Phone digital assistant in action. The video begins with the initial set up, in which you will be asked to allow Cortana to access your information and sign in to your Microsoft account. Once you’re logged in, Cortana will quickly “absorb the entire internet” before asking you what you would like to be called.

After you’ve decided on a nickname, you will be given the option to acquaint yourself with Cortana by answering a series of personal questions — anything from what motivates you to leave the house to which parts of your evening you consider most enjoyable. A message preceding the questions notes that they have not been finalized yet.

Another feature revolving around Cortana is labeled ‘quiet hours.’ Via the description:

“During quiet hours, Cortana handles your calls and texts and silences other notifications. You can turn it on and off  when you like, or set it to turn on automatically.”

In order to access Cortana, you can either select the tile dedicated to the app or simply hold down the search button at the bottom of the phone. Cortana appears to be a balance between Siri and Google Now, so it willll be interesting to see how users react to the new feature when it launches this year alongside Windows Phone 8.1. The video can be seen below: