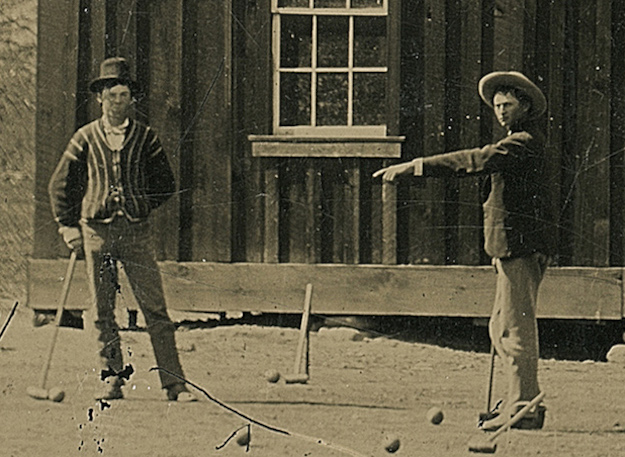 In what may turn out to be the bargain of a lifetime, a coin dealer named Randy Guijarro in 2010 paid $2 for a miscellaneous lot from a California junk shop. Come to find out years later, the lot contained an extremely rare photograph of Billy the Kid, the famous outlaw who lived in the American Old West during the mid-1800s.

The photo, which depicts Billy the Kid (real name Henry McCarty) playing croquet, is likely to generate millions of dollars once it’s put up for sale via Kagin, a company which specializes in collecting and selling coins and collectibles. Note that in the photo above, McCarty is positioned on the left.

What makes the photo especially valuable is that it’s only the second verified photo of McCarty to ever be found. That being the case, Kagin naturally pulled out all the stops in order to determine if the photo was, in fact, authentic.

“We had to be sure we could answer and verify where, when, how and why this photograph was taken,” Kagin’s David McCarthy explained. “Simple resemblance is not enough in a case like this — a team of experts had to be assembled to address each and every detail in the photo to insure that nothing was out of place.  After more than a year of methodical study including my own inspection of the site, there is now overwhelming evidence of the image’s authenticity.”

As far as pricing goes, the photo, if history is any indication, will sell for a few million dollars, easy.

The 4×5-inch tintype – which depicts Billy the Kid and several members of his gang, The Regulators, relaxing in the summer of 1878 – will be the subject of a two-hour documentary airing Sunday on the National Geographic Channel.

The only other known photograph of Billy the Kid is a portrait of the outlaw taken in Fort Sumner, NM in 1880. It sold for $2.3 million to Palm Beach, Fla., businessman William Koch in 2011 at Brian Lebel’s Annual Old West Show and Auction in Denver.

Though McCarty only lived to be 21, he’s an iconic figure in American history and has been referenced innumerable times in all mediums of pop culture, from books and movies to songs to TV shows.

The National Geographic program about the photo, which will detail how its authenticity was confirmed, is set to air this coming Sunday at 9 p.m.