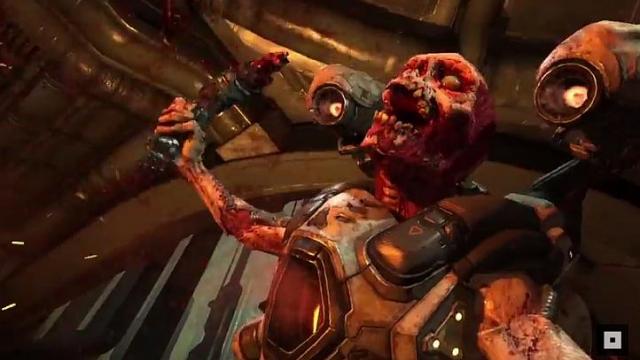 Bethesda kicked off this year’s E3 gaming conference with a huge press conference that was packed full of announcements, and fans of gruesome, gory games have a lot to look forward to from the Maryland-based video game maker. Of course, since the event took place late in the evening on Sunday, you probably missed it.

First and foremost, an announcement that surprises no one and pleases everyone: Doom is making a comeback. The new Doom game will be released in Spring 2016 and it will be insanely, ridiculously, absurdly gory. Just as it should be.

Doom will feature next-generation graphics with old school flare that Bethesda promises will please fans of the original. The reboot will also feature multiplayer support, of course.

Doom is great — we all love Doom — but Fallout 4 is undoubtedly the most hyped Bethesda title set to be released in the near future. And now, we can replace “near future” with an actual release date: November 10th, 2015.

Whaa?! November is still a long ways away, but if you want some fresh new Fallout action right away, there’s a new game that was just released to tide you over. Sort of.

Fallout Shelter isn’t even remotely close to providing the kind of action Fallout 4 will offer, but it lets you “build the perfect Vault, keep your Dwellers happy, and protect them from the dangers of the Wasteland.” You can download it right now by following this link.

Details surrounding this upcoming new game are still scarce, but Bethesda announced that it is creating a sequel to the 2012 title Dishonored. Basically, all we know right now is that the game is in the works, and it’ll allow you to switch back and forth between playing as Corvo Attano, the main character from the original, and heir to the throne of the Isles, Emily Kaldwin.

The last of Bethesda’s top 5 announcements is one that takes us off the screen and into the physical world: There will soon be an Eldar Scrolls card game.

As is the case with the company’s Dishonored sequel, details are very limited for the time being. As you might imagine, the game will include an on-screen element (coming to PC and iPad), and the game will be released sometime this year.