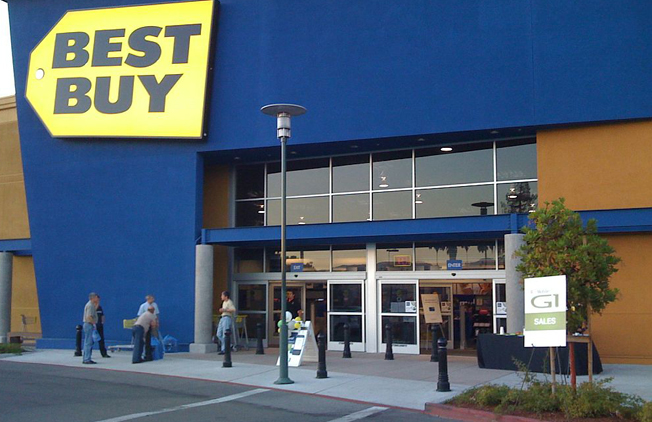 Shares of Best Buy (BBY) tumbled on Tuesday following the company’s weaker-than-expected earnings report. The struggling consumer electronics retailer posted third-quarter results of $0.03 per share, well below Wall Street’s expectations of $0.12. Best Buy’s profit fell a whopping 94% from a year ago while sales fell 3.5% to $10.75 billion from $11.15 billion. CEO Hubert Joly was not pleased with the earnings, although he did note that Best Buy is “taking steps to rejuvenate its business.”

It was previously reported that the big-box retailer would begin to match prices this holiday season of its Internet-based competitors. The changes were said to be a part of the company’s efforts to decrease the growing number of people who browse Best Buy’s stores and then buy from online competitors, a practice known as “showrooming.”

“Few people are going to be willing to pay $80 for a cable in-store when they know they can buy an equivalent product online for $5,” Rakesh Agrawal, principal analyst at San Francisco-based consulting firm reDesign Mobile, said to Reuters.

Investors aren’t confident in the retailer, however. Much to shareholders’ dismay, Best Buy rejected an $8.5 billion buyout offer from the company’s founder and former CEO Richard Schulze earlier this year, though he is reportedly planning to revise his offer.

Bloomberg reported that Schulze asked the retailer for an additional 30 days to conduct due diligence. The founder and former CEO is reportedly working with three private-equity firms to offer a more appealing proposal to the company. Schulze and his partners are said to be interested in seeing how Best Buy performs this holiday season before they agree to one of the largest buyouts in recent years.

At the time of writing, shares of Best Buy were down more than 10% on the day and things are expected to get worse. The company lowered its full-year guidance and now expects to generate free cash flow of between $850 million and $1.05 billion, compared to the $1.25 billion to $1.5 billion it previously expected.

Best Buy’s stock is already down more than 40% on the year and its market cap has shrunken to $4.07 billion. An $8.5 billion buyout — or roughly $25 per share, a premium close to 100% over Best Buy’s current stock price — now looks more appealing than ever given the fact that the last time the company’s stock was this low was in December of 2000.