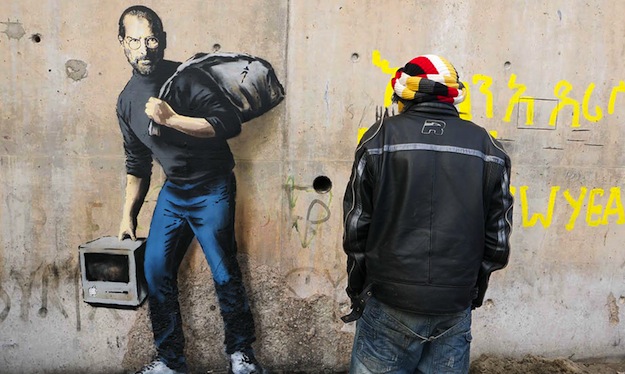 Banksy, the legendary graffiti and street artist whose identity still remains something of a mystery, recently paid a visit to the “Jungle” Refugee Camp in Calais, France where he left four new pieces of compelling artwork. Of particular note, though, is a piece depicting Apple co-founder Steve Jobs carrying what appears to be an original Mac and a bag – full of what we presume are his personal items – over his shoulder. Banksy titled the piece, “The Son of a Migrant from Syria.”

Obviously, Banksy’s work here touches on the ongoing discussion surrounding millions of displaced Syrian refugees who fled their homes due to a bloody Syrian civil war that has been raging on for nearly five years. Not surprisingly, the debate regarding how to handle the refugees has broken down across political lines in the United States. While many right-leaning Americans are wary of letting refugees in due to security considerations, those on the left believe that giving the refugees a new home is the humanitarian and right thing to do. As for other points commonly made, some on the right have also said that allowing scores of new refugees in would represent a drain on the economy. Others, though, have countered by saying that the new refugees will have a net positive impact on American “culture, business and technology.”

Banksy, of course, falls into the latter group. In a statement accompanying his Steve Jobs themed piece of artwork, Banksy writes.

We’re often led to believe migration is a drain on the country’s resources, but Steve Jobs was the son of a Syrian migrant.

Apple is the world’s most profitable company, it pays over $7 billion a year in taxes – and it only exists because they allowed in a young man from Homs.

Indeed, Jobs’ real father – who is still alive and living in Nevada – was actually an immigrant named Abdul Fattah Jandali. Originally hailing from the Syrian city of Homs, Jandali moved to Lebanon for college where he studied at the University of Beirut. As noted in this Macworld feature, Jandali is a non-practicing Muslim who ultimately fled Lebanon “because of protests and demonstrations that eventually toppled the president of Lebanon.”

Unlike many of the Syrian migrants now fleeing to Europe Jandali moved to New York, where he lived with a relative, Najm Eddin al-Rifai, who was the Syrian ambassador to the United Nations.

Jandali studied at Colombia University and Wisconsin University where he received a scholarship that enabled him to obtain a Ph.D. in Economics and Political Sciences.

While studying in Wisconsin Jandali met and dated a German-Swiss Catholic called Joanne Carol Schieble, who was soon pregnant with his child.

That child, of course, was Steve Jobs. However, because Schieble’s conservative Catholic father wasn’t happy about his daughter marrying a Muslim, the child was put up for adoption. And the rest, as they say, is history.

Two other pieces from Banksy worth highlighting include the following.

This one is captioned with “We’re not all in the same boat.”

And this piece, featuring a vulture and an innocent child ready for a new life is arguably the most moving of the bunch.