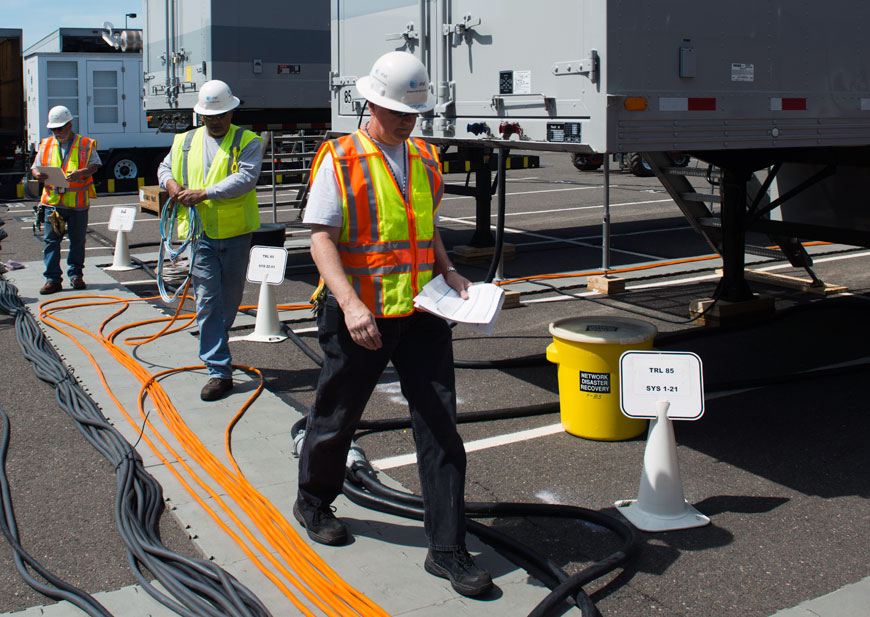 Making sure that people have access to the Internet in the wake of disasters has become crucially important since it gives disaster victims the ability to communicate and learn important information that could help save lives. But what happens if an ISP’s basic infrastructure in a given area gets completely wiped out by a hurricane without any hope of being rebuilt for months? In AT&T’s case, that’s when it’s time to start rolling out its fleet of network equipment trailers that are capable of replicating the functions of a 10-story office building in the space of a small parking lot.

BGR travelled to Hartford, Connecticut last week to get a first-hand look at how AT&T prepares its Network Disaster Recovery trailer fleet for situations where the carrier’s entire central infrastructure has been completely demolished. What makes the entire exercise so impressive is the fact that AT&T goes into an area assuming it will have no ability to connect to the Internet. At first the company will often roll in a satellite truck that will give its makeshift trailer park access to the Internet, albeit with limited bandwidth. From there, the carrier’s team of engineers works to replicate a fiber core capable of ideally providing service to an affected area within a day or two of arriving.

Once this basic connection is up and running, AT&T engineers will figure out the best place for them to splice into the company’s fiber infrastructure. In the case of the September 11th terrorist attacks, for instance, AT&T replaced a switching station near the World Trade Center with an NDR fleet located far away in Jersey City. But because the carrier was able to access the fiber infrastructure in New York, it was able to get its services in Manhattan back up and running within two days despite being located across the Hudson River.

The amount of equipment that AT&T packs into its trailers is astonishing. Among other things, the company’s fleet features a set of IP trailers that it says “can scale up to a capacity of over 10,000 T3s” when fully equipped, a 53-foot command center trailer that acts as the hub of network operations, power supply trailers that contain 600kW generators and even a shed dedicated solely to hammers, wrenches, screwdrivers and other tools of the trade.

AT&T has invested more than $600 million in its NDR program and equipment over the past 20 years and the company now has a total fleet of over 320 equipment trailers spread throughout the United States. Given the drill exercise we saw last week, it’s clear that the company really does have a top-notch disaster recovery unit that should provide comfort to any customers who live in areas prone to hurricanes, earthquakes and other disruptive forces of nature.

AT&T may not be able to guarantee 100% uptime when disaster strikes, but at least you’ll know that when a huge fleet of trailers roll into your area that help is very much on the way.