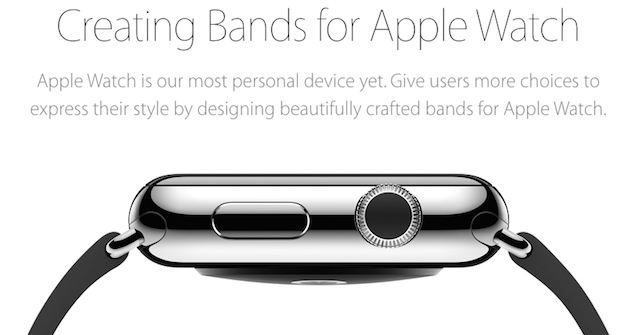 While most Apple products don’t offer a lot in the way of aesthetic variety, the Apple Watch is understandably a completely different beast. Despite housing a myriad of advanced and complex technologies, the Apple Watch remains, at its core, a piece of jewelry.

Apple, to its credit, understood this from the very beginning. As a result, the Apple Watch was introduced in an assortment of styles, not to mention two different sizes. Yet because the range of fashion styles is somewhat endless, not to mention prone to ebbs and flows in popularity, Apple has wisely chosen to allow third-party manufacturers to develop their own watch bands for the Apple Watch.

On Monday evening, Apple published a new page on its developer website detailing the procedures and guidelines band manufacturers must follow in order to create Apple-approved watch bands. Similar to what Apple implemented with the iPod and the iPhone, compliant bands will be certified as such under Apple’s Made for Apple Watch program.

“Apple Watch bands are easily changed with simple release buttons and lugs that secure the band to the Apple Watch case,” Apple’s new page explains. “When creating your custom bands, refer to the band design guidelines and lug profile. Apple Watch lugs will be available soon through the Made for Apple Watch program.”

While the majority of the guidelines center on recommended materials and detailed schematics, it’s worth noting that Apple does make a point of stating that bands cannot include integrated magnetic chargers. Naturally, Apple also notes that bands should not be designed in such a way as to “prevent the user’s skin from maintaining direct contact with the Apple Watch heart rate sensors.”

It’s also worth highlighting that Apple approved watch bands must comply with prescribed durability requirements and certain environmental regulations (on a region by region basis).

Looking forward, it’s going to be extremely interesting to see what types of new styles manufacturers come up with. All in all, it’s an extremely smart move by Apple to let third parties lend their own design sensibilities to Apple Watch bands.