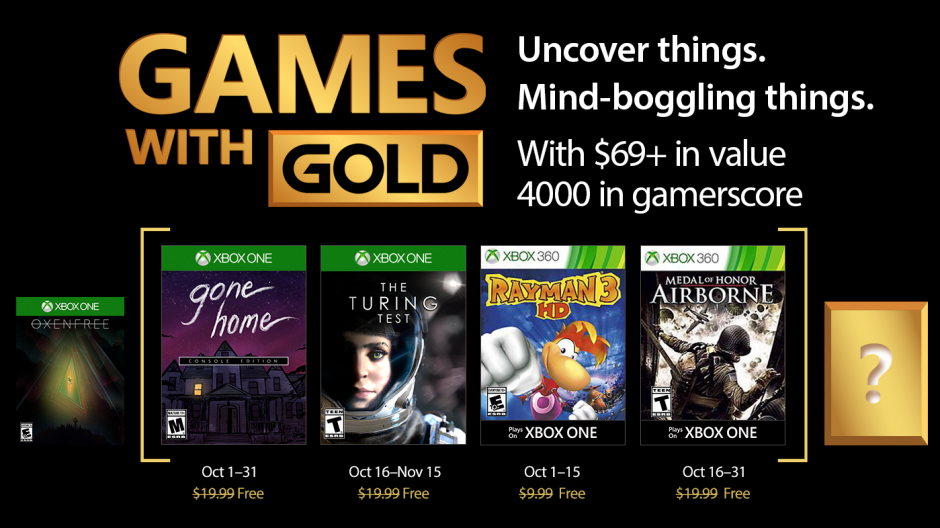 I, like countless others, have spent the past few weeks hopelessly obsessed with Destiny 2. Every Tuesday after work, I jump on and complete the latest milestones so that I can get some marginally better gear to boost my character’s power level. But as I begin to run out of things to do in Destiny 2, I’m going to need to find other games to keep me occupied. Thankfully, Xbox is here to save the day starting next week.

October’s Games with Gold selection features some interesting indies for Xbox One in Gone Home: Console Edition and The Turing Test. But if you prefer action to narrative, you can also pick up Rayman 3 HD and Medal of Honor: Airborne on either Xbox 360 or Xbox One, thanks to backward compatibility.

Here are the details on the availability of the Xbox One and Xbox 360 Games with Gold for October:

You’ll save almost $70 if you pick up all four games and can add up to 4000 points to your gamerscore. Also, keep in mind that each of the Xbox 360 titles are backward compatible with the Xbox One, so even if you don’t have an Xbox 360 on hand, you can still download all four games listed above.

You can check out footage of all four of October’s free Games with Gold in the video below: