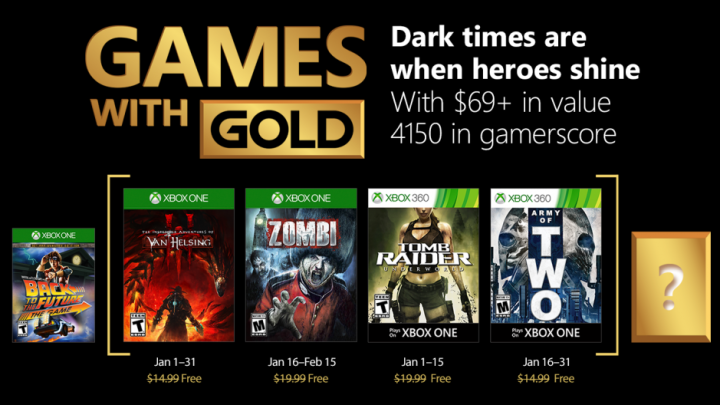 2017 is (mercifully) almost over, which means it’s time to start looking ahead to 2018. And where better to start than a new collection of free games for Xbox Live Gold subscribers coming in January. Thankfully, the games next month are a major improvement over December’s selection, which was one of the worst of 2017.

The highlight of the month is The Incredible Adventures of Van Helsing III, which is making its debut on Xbox One as part of the Games with Gold program. It will also be enhanced for Xbox One X, so expect it to look even better than it did when it hit PC in 2015. Mike Wehner’s favorite game of all-time, Zombi, is going to be free on Xbox One too, along with Tomb Raider Underworld and Army of Two on Xbox 360.

Here are the details on the availability of all the Xbox One and Xbox 360 Games with Gold for January:

You’ll save over $60 if you pick up all four games and can add up to 4150 points to your gamerscore. Also, keep in mind that each of the Xbox 360 titles are backward compatible with the Xbox One, so even if you don’t have an Xbox 360 on hand, you can still download all four games listed above. See them in action below: