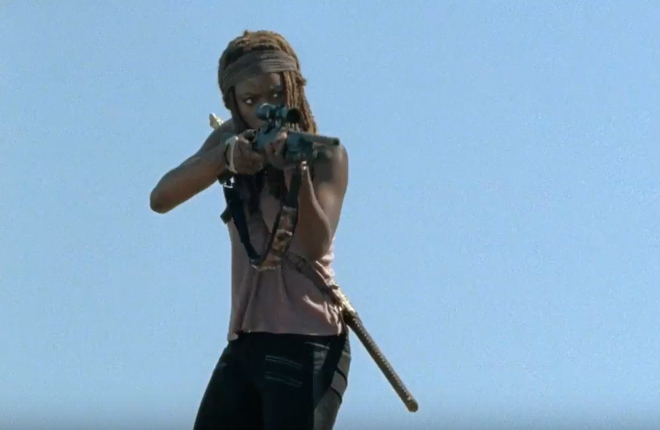 We’re four episodes in, and The Walking Dead brought stupid back. At this point, we really have to wonder how these people will survive in such a hostile environment. But hey, I won’t say anything else just yet, as it’ll surely spoil episode 704 (titled Service) that just aired last night on AMC. This is your last chance — spoilers follow below.

So let me get this straight: you’ve met the toughest badass in the universe, as far as you can tell, and you do nothing? Negan is the worst nightmare for the people of Alexandria. Yes, you’re in shock, and yes, you’re still mourning the losses of Glenn and Abraham. But you just sleep in your bed like nothing happened? Well, do you, Rick?

Sure, you agree to give Negan half of what you make and find. It’s the law of the land after the zombie apocalypse. But does that mean you forget about every safety measure you may have put in place in Alexandria?

You don’t have people on the wall, defending against potential trespassers, not to mention the walkers? You know, so that you can see a convoy of trucks approaching. So you can see that Negan is knocking at your door. So one of your snipers — which is practically anyone but Michonne, but more on that later — can try to take him out? You know, because any community that lacks a leader is instantly in turmoil. We’ve seen this happen before in the past, Rick!

You don’t give people guns, or hide a truckload of them so you can find them later? You forget The Hilltop Colony doesn’t have any weapons? That’s because Negan probably did his job there as well. No matter how much he trusts his men, and no matter how sure he is that he cracked the Alexandrians, Negan must surely know that all it takes is a bullet to die. And, make no mistake, Negan knows what kind of fights the people of Alexandria have put up in the past, after losing quite a few battles in season 6.

Which gets me to the obvious question: you don’t ask anyone to kill Negan first chance they get? Negan might have everyone under his foot, but only because everyone is terrified of him. Sure, they have the numbers and the resources — and now all the guns — but you can still try to plan his assassination and take advantage of its fallout. Not everyone in his service will die for Negan. And not everyone can become Negan.

As was the case in other episodes, our favorite survivors are stupid again. All for the sake of keeping Daryl alive, or for avoiding other losses. Oh, and by the way, how is it that nobody misses Morgan and Carol?

Episode 4 did have plenty of notable events, though. For starters, Spencer is still a major dick. After all this time, he’s hiding resources from everyone else. And Rick treats Spencer just like Negan is treating Rick.

Michonne spent too much time with the sword. She can’t use a sniper rifle to kill a walker, which is what she was shooting at. Seriously, after all this time, we’re not proficient with a rifle?

Daryl looks completely broken. And the news that Maggie has died — she hasn’t actually die, thanks to Father Gabriel’s smart thinking — probably crushes him further. Daryl doesn’t talk at all during the episode, so we have no idea where he’s at right now. Father Gabriel is a new man, and he was quick on his feet when he fooled Negan into thinking Maggie had died.

Carl, Michonne, and Rosita have the revenge fire in them. Rick has it too, and for a second you think he might actually swing Lucille at Negan. So there’s going to be fighting at some point in the future. And yes, Alexandria will make bullets thanks to Eugene, who knows how to make them. Too bad they only have one gun now.

Then there’s Dwight, who has to act tough since that’s his job now. But he seems to care for Daryl in a way that still hasn’t been fully explained.

Finally, Negan is absolutely great. You’ll love to hate him. He’s really good at controlling his subjects and knows how to handle any situation. That’s why he burned the mattresses he took from Alexandria. That’s why he let Rick hold Lucille for the entire episode. That’s why he took all the guns. And he sees some of himself in Rick as well, which is probably why he’s been trying so hard to break him.

Oh, and kudos for Rick’s acknowledgement that Shane is Judith’s father. That was definitely a surprise.