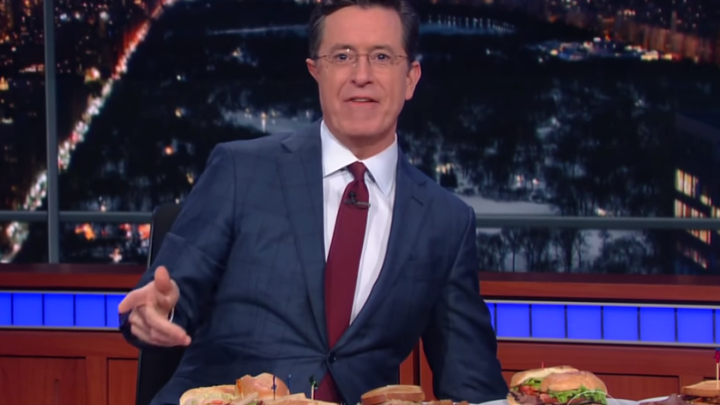 As someone who’s been writing snappy headlines for years now, I love a good pun. And so, it seems, does Stephen Colbert. After MSNBC host Chris Hayes this week inadvertently referred to presidential candidate Bernie Sanders as “Bernie Sandwiches,” Colbert decided to have a little fun by making several puns involving both Sanders and sandwiches. Impressively, Colbert and his writing staff managed to cram a whopping 11 different sandwich puns into one minute of airtime.

DON’T MISS: The scientific reasons you want to punch Martin Shkreli in the face

Every time Colbert made a sandwich pun, he brought out a plate that contained the sandwich type he referenced. It’s something that wouldn’t be very funny if you only did, say four or five sandwiches but once you get past the seventh sandwich it becomes genuinely very funny.

Here’s the full monologue with the sandwich names in bold:

Bernie Sandwiches [is someone] everyone can get behind because he’s not a member of the old boys’ club, he fights the rich guys on behalf of the po’ boys. He’s someone with a trusting, open face and will surely win Florida by appealing to Cubans and he is Au Jus-ish candidate. Plus he has a long history of supporting the LGBLT community. Sure, the Democratic establishment may have a beef with him now because he’s been Reuben them the wrong way. And I know it may sound hoagie and he doesn’t have it all wrapped up yet, but in times like these his supporters believe we need a hero.

Check out the full video below — the sandwich puns start at the 6:50 mark.