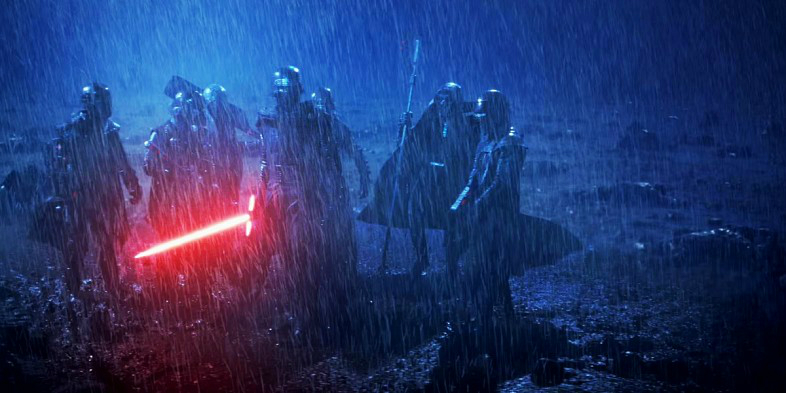 The new Star Wars movie is on its track to become the highest grossing film ever, with millions of fans having seen the movie already. Being the first episode in the new saga, the new movie opens up a lot more questions than it answers and has opened up a flood of speculation about what’s to come from fans.

Amidst the numerous fan theories that try to explain Rey, Finn, and Poe Dameron there are also certain official revelations about the movie regarding Kylo Ren, Han Solo, and Supreme Leader Snoke – not to mention that the official screenplay for the movie is also out. Furthermore, a short tweet from a LucasFilm executive reveals one significant detail about one of Kylo Ren’s most despicable actions in the film.

But if you haven’t seen the new Star Wars yet, you should know the following contains plenty of spoilers.

What happened to some characters in the 30 years before the events of Star Wars VII isn’t fully explained yet. But Rey’s Force vision shows Kylo Ren surrounded by the Knights of Ren, who serve him and Snoke. Rey sees them murdering various individuals, who might be Jedis from Luke’s academy – or, at least, that’s the audience’s first assumption.

However, Lucasfilm Creative Executive Pablo Hidalgo said on Twitter that the action in the flashback does not take place at Luke’s Academy. Instead, it’s “somewhere else,” that Kylo and the knights kill a warrior “identified as ‘clan leader’” by production.

A recent report suggested the massacre may have taken place on Endor, as the Knights of Ren went to retrieve the helmet of Darth Vader, killing the Ewoks that may have been in the way.

Hidalgo did not reveal any other details about that scene, so we have no idea who the victims of Kylo Ren are or why Kylo did it. It seems to be clear that Kylo Ren is no longer Ben Solo in that shot, as he’s dressed in his Darth Vader-like uniform, and he’s surrounded by loyal Knights of Ren. It also seems to be clear this particular scene is needed for the events in following episodes. After all, why would Rey have to see this particular evil feat in her vision? The scene might even be related to Rey’s mysterious past.

But Abrams and Co. definitely needed these types of scenes to set Kylo Ren up as the next Star Wars villain to fear.

Kylo Ren, the emo prince of the Dark Side, is a very complex character. We have no idea why he abandoned his parents and his uncle to join Snoke, but we do know he’s on a mission to finish what his grandfather started.

Kylo Ren is the new Darth Vader of Star Wars. A former Jedi-in-training, he is a troubled individual who doesn’t want to repeat the mistakes of Darth Vader. And he can be very evil. Like Anakin, he killed a bunch of Jedis, likely former peers. But unlike Darth Vader, he did not succumb to feelings when dealing with family. Darth Vader saved his son, but Kylo Ren killed Han Solo. On top of that, he also killed the creatures in Rey’s vision, and probably countless others.

Thus, we have at least three independent events that show how Kylo Ren is ascending in evilness, stopping at nothing to get his way – we’ll just have to forget for a second that Rey almost kills him at the end of the first movie, in spite of all his immense power.