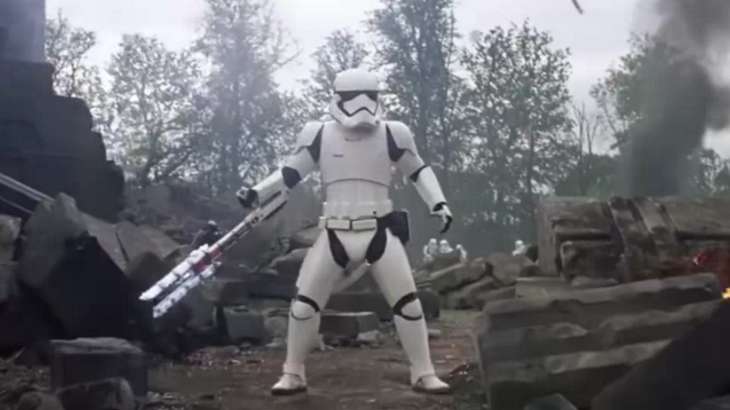 Stormtroopers are all alike in the universe of Star Wars. They wear the same uniform and are supposed to serve the same purpose: executing the will of the Empire. They’re only identified by a string of letters and numbers and they usually obey any orders they’re given. That’s not the case for FN-2187, who deserts and establishes himself as Finn – played by John Boyega in Star Wars: The Force Awakens – one of the main characters in the new Star Wars movie.

But there’s one other stormtrooper the crowds love even though he fights for the First Order, and for good reason. His name is TR-8R and we’ll tell you all about him in this post.

As Polygon explains, TR-8R isn’t the real name of the military man who bravely fights a lightsaber-wielding Finn. TR-8R is just fan-made code for “Traitor,” which is what the stormtrooper tells Finn when he sees him. We have no idea who TR-8R really is and he’s not a crucial character in the movie, but he has certainly made an impression on fans.

In the scene in question, J.J. Abrams shows us the evolution of Finn – he’s ready to fight the First Order even if that means using a weapon he has no experience with – as well as a very cool stormtrooper weapon. It appears that the First Order has developed special weapons to defend against lightsabers, which is something that we knew from the trailers. The scene also suggests that regular military men have had some advanced training using that stun staff against lightsabers, and it could explain why Finn seems to find himself at ease with a lightsaber.

The identity of TR-8R might not be revealed, but it looks like he took Finn’s desertion as a personal affront, and that’s probably why he didn’t use a blaster against him.

Polygon further reveals the background story for Finn, published in a novel one day ahead of the Force Awakens’ premiere. Called Before the Awakening, the novel has three long stories and one is devoted to Finn.

Finn, or FN-2187, was part of a four-man fire team that included three others: FN-2199, FN-2000 and FN-2003 known as Nines, Zero and Slip. Finn doesn’t have a nickname and he appears to be the leader. A seasoned stormtrooper figures him out in the book: “An outsider. You’re on the outside, and you’ll always be looking in and wondering why you don’t belong.”

Finn is in the top 1% in exams, an expert with tactics, blasters and hand-to-hand weapons, and a good candidate for making officer. However, his empathy for colleagues convinces his direct superior Captain Phasma to not recommend him for fast-track officer training. Apparently, Finn cares even more for his teammates than the final mission.

That’s easily seen at the beginning of the movie, where Finn witnesses the destruction of the First Order, including the death of a colleague, who might be FN-2003/Slip – that stormtrooper often slips up, which is why he got that moniker.

Getting back to TR-8R, the fact that the stormtrooper recognizes Finn suggests he might be either Zero or Nines, people who Finn trained with and grew up with. That’s a detail that ultimately doesn’t impact the story. What does matter is that TR-8R’s sick fighting skills single him out from all of the other stormtroopers seen in Star Wars movies.

Oh, and be sure to check out BuzzFeed‘s massive collection of TR-8R memes at this link.