Overwatch is doing remarkably well for a two-year-old multiplayer game that relies on people being civil to strangers online. It recently hit 40 million users, new maps and heroes are still pouring out of Blizzard’s studios for no extra cost, and the Overwatch League pro tier is starting to find its legs.

But at the casual level, there are persistent problems that have still existed since the beginning that have nothing to do with mechanical gameplay. Overwatch relies on having a balanced team comp for the game to work well, but getting that hallowed 2/2/2 setup with a bunch of strangers has been a problem since the game first launched. In the latest update, however, Blizzard has rolled out a whole new way of finding teams and finding games that just might fix all of the problems. 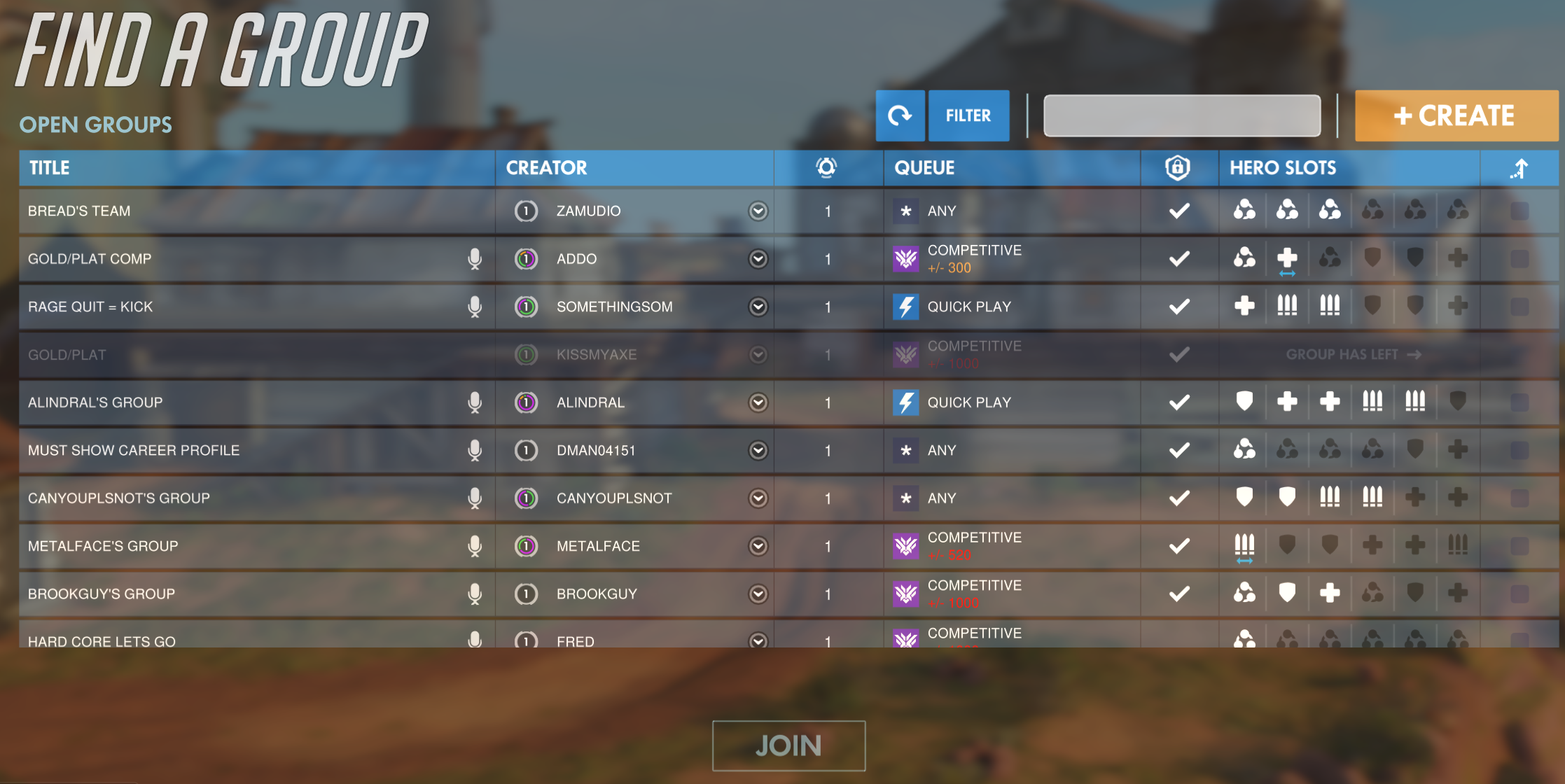 The biggest new feature in a huge patch that went live this afternoon is called Looking for Group. It’s exactly what it sounds like: a browser where you can find a group to play Quick Play or Competitive before queuing for games. Most importantly, it also allows groups to assemble based on what role each person wants to play, and once you get into game, it locks players into those roles. If you sign up to play healer, you can switch around between different healers, but you can’t jump off to DPS or tank.

This is a seismic change in how people play Overwatch. Oftentimes, players have a ‘main’ hero from each category, and people will flex around between different roles in the middle of a game to find a strategy that works. With role restrictions, that’s not possible any more; if you need a Moira to counter someone but neither of the people playing healer can play her well, you’re out of luck.

But on the flip side, you can be guaranteed that you’re going to have a proper team comp, and based on my incredibly limited experience with Looking for Group so far, people who bother to queue for a team are much more willing to play properly, communicate, and generally do all the things that make Overwatch fun.

The full patch notes — which include some massive changes like a complete Symmetra overhaul and major changes to Horizon Lunar Colony — are below.

Acknowledge your fellow Overwatch players’ positivity with endorsements! Recognize commendable behavior for players exhibiting sportsmanship, being a good teammate, or for shot calling. Commend players who lead you to victory, put the team’s needs above their own, or exhibit humility in victory or grace in defeat. Endorsements are readily available to view on Career Profiles, the Groups menu, and more so you can tell at a glance the types of players you’re playing with. Those who consistently maintain a high endorsement level will receive periodic rewards, while those who display negative behavior or accrue suspensions will lose their endorsements.

Play your way using the Looking for Group feature! You can control your gameplay experience before stepping into a match by using specific parameters to create your dream team. Join a team of other like-minded players or lead a group of your own by creating a group with your personal preferences such as game mode, role enforcement, and more. Those who want to queue up for Quick Play, Play vs AI, or any competitive mode can set the types of roles others can play. These specifications will then be activated in-game (e.g. players who chose a support role will be restricted to only using heroes in that category).

Developer Comments:“Since the line between Offense and Defense heroes has become increasingly blurred, we’ve decided to group all those heroes into a single new “Damage” category. We believe that the term more closely matches the role name that is now being used in Overwatch League and across most of the game’s community.”

Developer Comments The increased movement speed on Meteor Strike gives Doomfist new options in how and where to deploy it. His passive is also being increased, allowing him to survive more often when diving into enemies.

Developer Comments While McCree’s Deadeye rarely came into play at 70 meters, we are increasing the range so it cannot be a limiting factor during normal gameplay.

Developer Comments Supercharger wasn’t getting enough use, considering its impact. This change allows Orisa to use her ultimate more aggressively, knowing that she will be able to generate them more easily.

Developer Comments The goal of these changes is to move Symmetra to her new damage role and make her more flexible and viable across more areas of the game than she was previously. Now that Symmetra is no longer a support hero, she is expected to be able to dish out heavy damage, and these changes allow for her to do so. She should be more powerful and interesting in more team compositions and maps, and she should also be stronger on offense and defense.

Developer Comments: We’ve wanted to make some gameplay improvements to Horizon Lunar Colony for some time now. The defenders’ spawn room had a problem with its main exit that allowed defenders to quickly duck back inside and regain health while attackers shot at them without doing damage. Since we were already reworking the entire back area, we decided to make some more changes addressing player feedback. The idea behind the rework of Point A was to not only help the defenders a bit, but also provide some gameplay options aside from sitting on the point and trying to hold it for as long as possible. Easier access to high ground, as well as limiting the routes for attackers (or at least allowing for defenders to more easily spot the attackers), will allow more opportunity for counters and create a better gameplay experience.We’ve made a lot of additions and changes to the art throughout the map for you to discover as well.