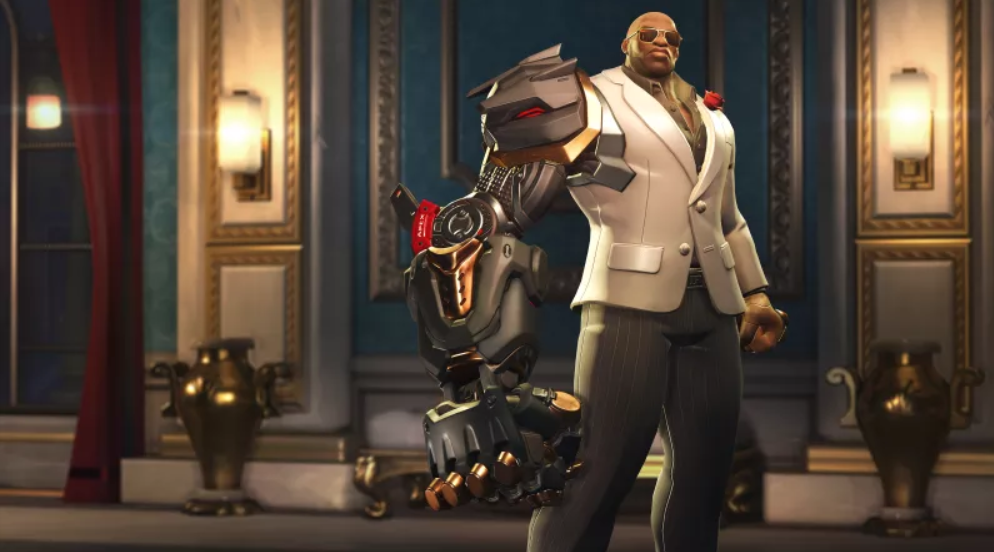 Believe it or not, Overwatch has been live and playable for two years now. Blizzard is celebrating the milestone in a truly appropriate fashion, rolling out a new event with a bunch of new skins, dances, a new map, and some significant hero changes.

The biggest playable update is the introduction of a new free-for-all map, called Petra. It has serious vertical elements, accessible with jump pads just like in Overwatch‘s other free-for-all map.

In addition to the new map, most of Overwatch‘s old brawls and special events are playable during the anniversary event, with a brawl of the day cycling through the Arcade. Cosmetics have always been a big part of the special events, and this year is no different, with eight new Legendary skins: Stealth Bastion, Shieldmaiden Brigitte, Formal Doomfist, Buccaneer Junkrat, Sherlock McCree, Forest Spirit Orisa, Magician Symmetra, and Cybjörn Torbjörn.

In terms of hero changes, the biggest update is to Ana, the sniper hero who has been upstaged recently. Her ammo has a bump from 10 to 14 shots per clip, and she now also shoots through full-health allies, which is a big plus for when things get messy during team fights. Brigitte and Hanzo both got nerfed, with Brigitte’s ultimate Armor topping out at an additional 100 rather than 150, and her shield bash cooldown up to 6 seconds.

Many of our past seasonal brawls will be available to play in the Arcade, and the brawl of the day will rotate throughout the event.

Thank you all so much for spending the last two years playing Overwatch with us, and we look forward to celebrating with you in-game!

A group of archaeologists have begun an excavation and preservation project among the ruins of Petra, a new FFA (free-for-all) Deathmatch map that puts all heroes on their own, facing off against one another until one hero scores enough eliminations to win the match.
Take in Petra’s majestic views, from high vistas to twisting passageways and deep caverns. Travel along deadly cliffs, but be careful to not fall off! A dilapidated bridge stretches across the map, and the ground underneath it can crumble away into a lethal pit (with a little firepower). Hopping on a green jump pad will boost you up to Petra’s higher levels and unlock new strategic possibilities for you. . . .

Petra and Château Guillard will also be available in an optional Competitive FFA Deathmatch mode with placement matches, skill rating, leaderboards, and the opportunity to earn competitive points.

Developer Comments: These changes should help Ana when she is trying to land clutch heals in the middle of a big fight. Allies that do not need healing will no longer potentially block shots meant for teammates that do need it. Increasing her magazine size makes it less likely that Ana will be forced into a reloading in the middle of an important fight.

Developer Comments: Brigitte’s ultimate is very powerful, especially when it gets stacked up to its maximum value on many allies. This change will reduce the maximum armor value of Rally, but does not reduce the overall amount of armor given by the ability over its duration. This means when used in combat while her allies are taking damage, it should feel about the same, but the lingering effects of the armor should have less of an impact. Her Shield Bash is a very strong ability on a fairly short cooldown, making it difficult for her opponents to play around. Increasing this cooldown allows for more options when battling against her.

Developer Comments: Hanzo’s Storm Arrows are doing too much damage considering his other changes, such as Lunge and projectile speed. This damage reduction will give Hanzo’s enemies a more reasonable chance to react and fight against him while using Storm Arrows.