After the release of the Nintendo 3DS way back in 2011, Nintendo eventually decided to deep-six the signature 3D feature in a later release and manufactured a plain ol’ 2DS system for those fans who didn’t want the extra immersive quality. But just because the company backtracked slightly, that doesn’t mean Nintendo threw in the towel completely on 3D gaming. On the contrary — a new patent reveals the company has been looking at a new way of bringing this feature to TVs, presumably for inclusion with the Nintendo Switch.

The patent, published by the US Patent and Trademark Office just last week, is for “Eye Tracking-Enabled 3D Viewing” and was filed by Nintendo back in September. The idea here is for Nintendo to put an eye-tracking camera on a TV that tracks where viewers are looking so that it can deliver a 3D image.

The gamer wouldn’t necessarily have to wear a pair of glasses to help accomplish this, but the player would still need to wear a marker somewhere on their head that works with the camera. “Viewpoint movement detection can provide collision-related game logic benefits such as allowing a player to dodge projectiles, giving a game character an ability to ‘see’ the player when not behind line-of-sight obstacles, and other advantages,” the application reads.

A sketch filed with the patent application shows how it would work: 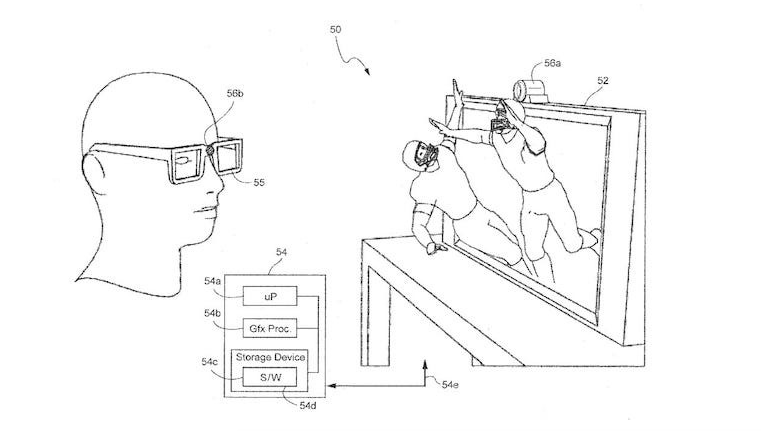 As with any news about patents, there’s no guarantee Nintendo may move forward with the idea here, so we’ll have to wait and see if the company eventually decides to bring 3D to the Switch. If it does, the move will mark yet another interesting chapter for a console that has given Nintendo newfound momentum of late, with the Switch actually ending up as the best-selling video game console for all of 2018.

That’s according to the latest report from the Entertainment Software Association (ESA) and The NPD Group, which reveals that the Switch topped rival consoles from the likes of Sony and Microsoft in both unit sales and dollars for 2018.