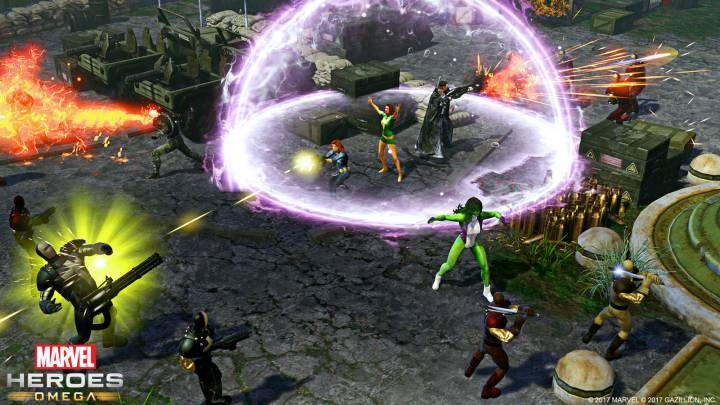 Nearly four years after launching Marvel Heroes on PC, developer Gazillion is bringing a slimmed-down version of the popular online action RPG to PlayStation 4 and Xbox One. Marvel Heroes Omega, the console version of the game, will feature 38 playable heroes from the Marvel universe at launch, as well as a nine-chapter story campaign and several additional modes such as Midtown Patrol and Danger Room.

For those of you who haven’t played the PC version, Marvel Heroes is a top-down action RPG — similar to Diablo — in which you take control of a Marvel hero and utilize their various skills to defeat waves of enemies. Having logged a few dozen hours into the game myself, I can say that it’s one of the more fun free-to-play MMOs on the market. You can watch the announce trailer for the console version right here:

In the very near future, Gazillion will kick off a closed beta test for Marvel Heroes Omega on PlayStation 4. If you want to be a part of it, you can guarantee a spot by purchasing one of the Founder’s Packs for sale on the PlayStation Store. Anyone who participates in the closed beta will receive Daredevil for free at launch.

When the closed beta ends, Gazillion will wipe the servers and prepare to introduce an Early Access program on PlayStation 4. Because of the differences between the two versions, console and PC players won’t be able to play together. Former Marvel Heroes players also won’t be able to transfer characters or progress.

Gazillion is also planning a closed beta for Xbox One, but will stagger the release of the two closed betas. It’s unclear when the Xbox One closed beta will begin, but it will be after the PlayStation 4 closed beta.