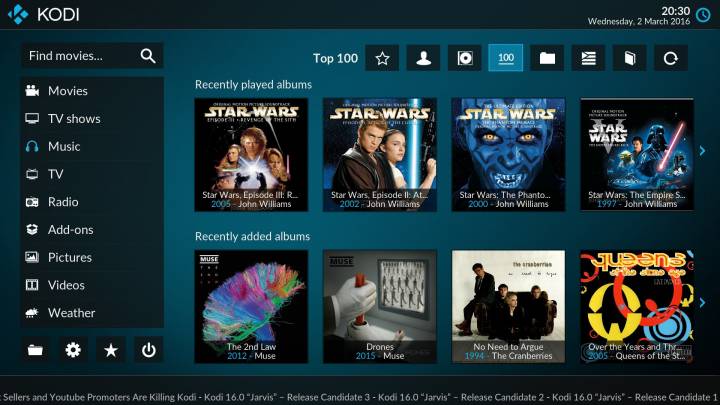 When it comes to console exclusives, the PS4 and Nintendo Switch wiped the floor with the Xbox One in 2017. With Crackdown 3 being delayed once again and Sea of Thieves not coming out of beta until 2018, the Xbox never really stood a chance. But with just a couple days left until the new year, Xbox One owners got a pleasant surprise.

On Friday, the team behind the open source home theater software Kodi revealed that the media player was available worldwide on the Xbox One digital store. The powerful and highly customizable software has become one of the most popular PC media players on the market, and its arrival on the Xbox One is worth celebrating.

As the Kodi team explains in a blog post, the software began life fifteen years ago as the XBMP (Xbox Media Player). The only way to get the open source player running on an OG Xbox was to hack the console, but Xbox owners who were willing to mod their consoles were rewarded with a surprisingly robust media player that added capabilities to the Xbox. XBMP eventually evolved into XBMC (Xbox Media Center), which then became Kodi.

Kodi is perhaps best known for its third-party add-ons, many of which allow users to stream pirated content on any device that will run the software. Kodi does not endorse pirating, but it is undoubtedly one of the reasons the player has gotten as much attention as it has over the past several years.

But the Kodi app that arrived on Xbox One this week is not quite the same version that you can download on PC. The team notes that the Xbox One app is still in development and lacks several major features, such as access to external storage devices or the Xbox One’s Blu-ray drive. There’s no telling when or if every feature of Kodi will make its way to the Xbox One version, but the developers are working to make the app as complete as possible.