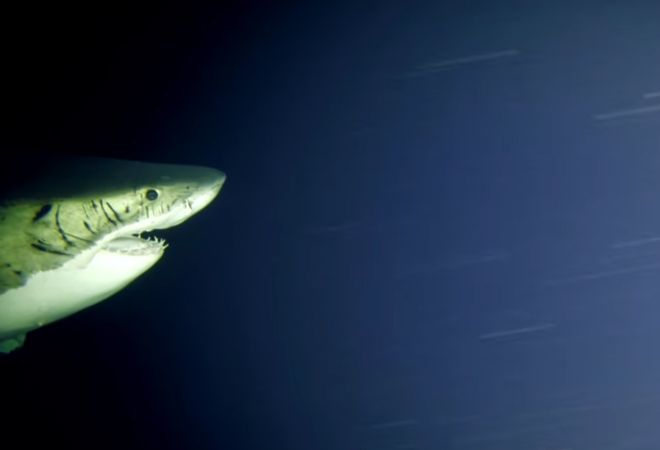 Ever woke up in your home bed not knowing exactly where you are? The temporary confusion fades away as you assimilate the familiarity of your surroundings. It’s probably the same place you wake up every morning, and it’s all coming back to you.

A great white shark, on the other hand, has an entirely different type of sleep experience, and it’ll likely wake up not knowing where it is. It turns out that the shark sleeps while swimming in a robot like auto-pilot mode. It’s sleep-swimming if you will, but that’s not a medical condition. The whole thing was captured on video for the first time.

Discovery explained in Shark Week 2016’s Jaws of the Deep that the shark wouldn’t stop swimming as sleep sets in. Doing that means falling towards the bottom of the ocean and potentially dying for lack of oxygen.

Instead, the female shark in the following video “steps” right into a current that not only helps her conserve energy during her swim on “auto pilot” mode while slumbering but also forces oxygen-filled water into her mouth, which stays open as she naps. The great white shark may not know where she will wake up next, but she will survive another night thanks to this fantastic life-preserving mechanism.

The entire thing is mesmerizing, as it explains how a great white shark’s routines change from night to day, showing for the first time how these creatures sleep.

Oh yes, and we can’t but acknowledge the fact that modern technology made the whole think possible. Swimming alongside the great white beast is a robotic submersible, that’s ready to capture the kind of footage humans would likely have a hard time recording.