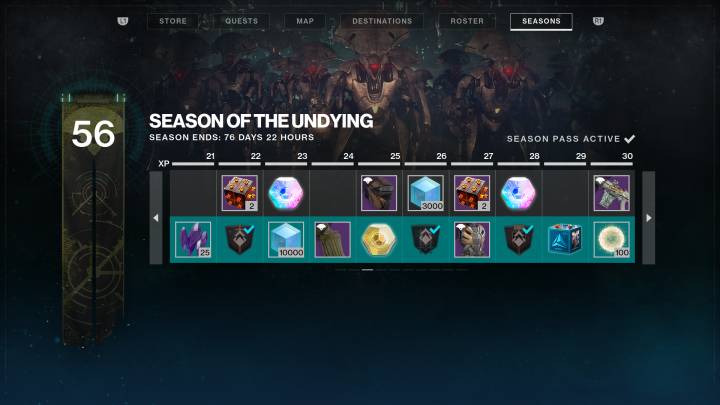 Countless changes are in store for Destiny 2 in the coming weeks, from the launch of the Shadowkeep expansion to the debut of Destiny 2: New Light, which will drop the price of the base game to free. But Bungie is also mixing up the game’s progression system substantially as well, giving players more tangible goals to reach for throughout each new season without having to depend on the right loot randomly dropping after a mission.

One way that Bungie will accomplish this is by adding a Fortnite-style battle pass (called a season pass in Destiny 2) which allows players to earn up to 100 ranks throughout the season, each of which comes with its own reward. There is a free track and a premium track each season, and if you want access to the premium track, you’ll have to pay $10. That $10 will also let you play all of the additional seasonal content Bungie brings to the game.

This is a huge change to progression in Destiny 2, as the best way to earn top-of-the-line armor and weapons prior to the season pass was by beating endgame content and battling in the Crucible repeatedly and hoping for a great drop, or completing what were often incredibly long and tedious quest chains for specific items.

Those elements of the game aren’t going anywhere, but players will now receive regularly scheduled rewards as they play in addition to whatever legendary grenade launcher or exotic helmet they happen to be hunting down at the time. As Bungie’s Luke Smith explained in a blog post on Thursday, “you’ll make progress by earning XP doing the things you’re already doing in Destiny—defeating monsters and completing bounties and activities.”

Season of the Undying, which will launch alongside Destiny 2: Shadowkeep (and will be included with every purchase of the expansion) will last for 10 weeks, and Smith says that within the last 2-4 weeks of the season, Bungie will allow players to pay for any season ranks they might have missed along the way. While some players will blow through 100 ranks within a month, other people don’t have as much time to dedicate to Destiny 2, and Bungie wants to make sure they at least have the option to receive all of the seasonal rewards.

Under the hood, the changes to seasons and progression in Destiny 2 aren’t really that dramatic, but on the surface, there are certainly enough changes to make some players a bit queasy. No matter what the microtransactions actually entail, or how easy they are to ignore, many players simply can’t stand their existence, and the addition of more free-to-play elements (for a game which is going to be free to play, by the way), will rub some players the wrong way. But this is the direction Bungie has chosen to go in, and it will be interesting to see the response.