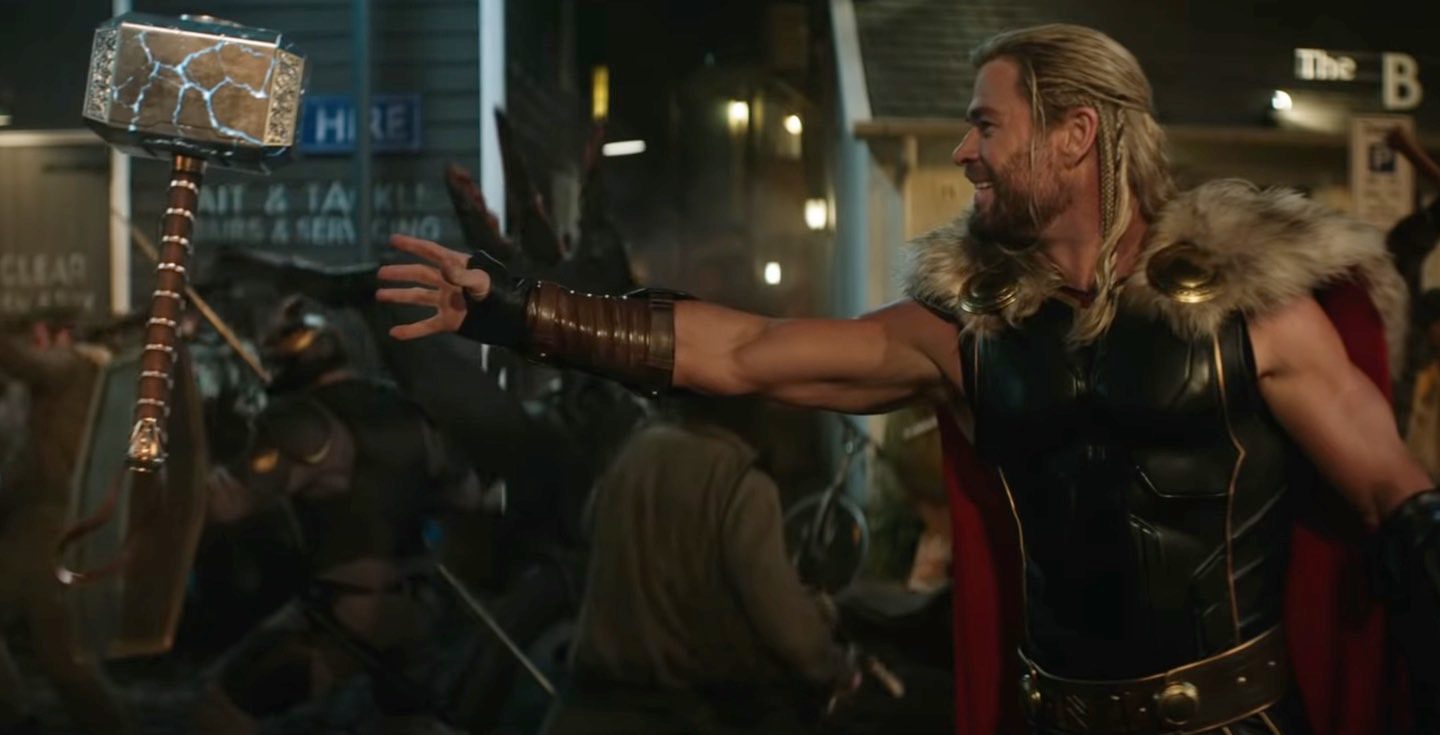 We’ve known Mjolnir would be repaired ever since Marvel announced Thor: Love and Thunder nearly three years ago. Just as we’ve known that Jane (Natalie Portman) would return to Thor 4 where she would rock the Mjolnir hammer. But Marvel never explained how the magical hammer would find its way back to Thor, and that remains one of the biggest questions surrounding Love and Thunder.

But Marvel did show the hammer in trailers and TV commercials, going as far as to tease that Mjolnir will get a new power in Love and Thunder. And, with only a couple of weeks left to go to the premiere, Marvel confirmed the new Mjolnir power that Mighty Thor would wield. Mind you, some spoilers will follow below.

Thor (Chris Hemsworth) lost Mjolnir in Ragnarok in a memorable scene. His sister Hela (Cate Blanchett) caught the hammer, held onto it, and then broke it into multiple pieces.

It all happened right before the events in Infinity War, so Thor found himself without a weapon while facing Thanos (Josh Brolin). That’s why he created Stormbreaker, an equally impressive hammer that Thor used for more than five years in the MCU.

The Mjolnir that Captain America (Chris Evans) got in Endgame came from a different reality. So the same Cap took it back to that timeline, leaving Thor to use Stormbreaker.

The Love and Thunder trailers made it clear so far that it’s not Thor who will repair Mjolnir. He’s shocked to see the hammer appear. Even more so to find out that Jane is using it while wearing armor similar to his.

We saw Jane in a bunch of fights in Love and Thunder trailers that showed familiar Mjolnir powers. She’s throwing and retrieving the hammer just like Thor did. She can call on Lightning, and she can fly using the weapon.

But in one trailer, it seemed as if the hammer’s various pieces could break free after you throw the hammer. Each piece would act as a stone projectile, hitting a different target. After that, the elements will return to the hammer.

That’s an exciting power that we thought Marvel would not confirm while marketing the movie. But Marvel released on Thursday the following Love and Thunder clip that confirms this new Mjolnir ability.

As you can see above, we’re looking at an actual scene from the movie, the mysterious fight where Thor senses Mjolnir and sees Jane using it. And it’s in this clip we see for the first time the hideous monsters attacking what seems to be planet Earth. And Jane uses Mjolnir’s new power to fight these beasts.

That’s not the only Love and Thunder clip that Marvel released this week. Also, on Thursday, Marvel gave fans another great scene from the movie featuring Thor and the Guardians as they prepare to save the people on a planet who lost their gods.

Thor is giving a motivational speech that might sound exciting to the natives. But we soon find out that it’s a speech that Thor often gives, one that the Guardians are more than familiar with. There’s no Mjolnir in this Love and Thunder scene, however.

Finally, there’s another clip that Marvel released earlier this week, one where the same Thor talks about forming the “greatest team ever” to beat the maniac who is looking to end them all. You’ll see some Mjolnir action in this one, as well as the goats that Thor will end up with below: