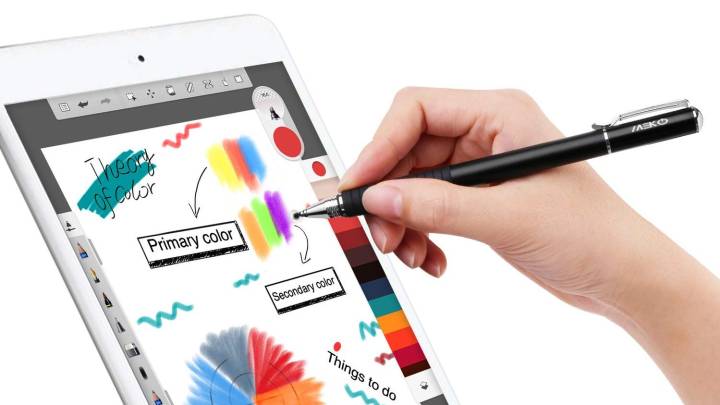 A sharp influx of touchscreen technology has changed the way we do business, read, write, and consume content in general. While the traditional ballpoint pen and notepad certainly haven’t gone extinct, they’ve become somewhat antiquated, thanks to tablets, smartphones, and lightweight laptops and MacBooks. If you’re someone who has, by and large, forgone traditional writing templates for intuitive touchscreen technology, then you (probably) live by the mantra that the pen is mightier than the sword but not as mighty as the stylus. Sure, the stylus has existed for decades, but they’ve never been used in the capacity that they are today. Whether you have a tablet, e-reader, or a large screen smartphone, there’s no denying how convenient a comfortable stylus can be to sort through your affairs — especially, if you’re a writer or somebody who prefers to jot down notes on their smart devices “the old fashioned way.” Of course, there are plenty of styluses out there that are designed to do just that. The only question that remains is: which one is the right one for you? Well, there are certainly a few different directions you can go in. Let’s take a look at some of the best options you can find on the cheap right now. 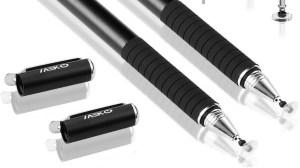 For a versatile stylus that is ergonomically designed to resemble a traditional pen, you’d be hard-pressed to find something better than the MEKO Universal Stylus. It’s made from stainless steel and aluminum — and no plastic parts at all — so it has the feel of an upscale ballpoint pen. But unlike your traditional pen, it contains a 2mm rubber point instead of a regular point. The precision point makes for more accurate touchscreen compatibility, allowing you to draw, write, take notes, and play games with far more ease. The pen itself is fairly versatile, as it’s double-sided with the aforementioned rubber tip as well as a fiber tip on the opposite end to control things that don’t need as fine a point, like flipping pages on your e-reader or simply scrolling through Twitter. The package comes with two styluses, so you either have a replacement or an extra one for another touchscreen device, as well as two caps to protect the fine rubber points, two replacement fiber points, and two replacement rubber points. If you’re looking for something with a concentration on writing and creative endeavors, this two-pack is certainly the perfect option. 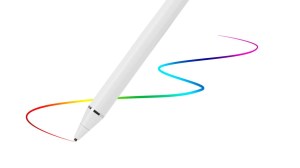 If you’re looking for a stylus that is both digitally enhanced and essentially doubles as a traditional ballpoint pen (only on touchscreen surfaces), then the Evach Active Stylus Digital Pen with Ultra Fine Tip Stylus is the right choice for you. This pen/stylus combo works as an Apple pen, iPhone stylus for iPads or iPad Pros, and a Samsung pen for tablets and smartphones. It’s made with a lightweight, ergonomic design, and is about 46mm in length with a 1.5mm tip for writing and drawing. The ballpoint tip is adjustable, which allows you to draw, swipe, and write accurately and professionally as if you were using an actual pen. There’s also a larger fabric tip on the other end for less detail-oriented projects and general swiping. The writing is smooth, and there’s no resistance when writing on a screen. This, of course, can be attributed to the pen’s unique buffer unit at tip design that provides increased accuracy and control against tablets and cellphone screens. Even if you have a screen protector on your device, this pen will still write smoothly. From a digital standpoint, this pen is fantastic. It doesn’t require Bluetooth to sync to any of your devices, and it contains a built-in battery with eight hours of active use when fully charged. It uses a Micro USB charger and only requires one hour of charging for full power (a fast charger is NOT recommended, as it can damage the internal chip). The pen also features smart save technology and auto shutdown after 30 minutes for safety. 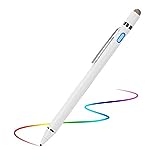 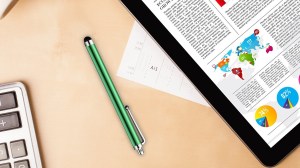 From a bang-for-your-buck standpoint — especially for those who want to buy styluses in bulk — this homEdge Stylus Pen Set of 20 Pack is an absolute no-brainer. You’re getting twenty styluses for one ultra-low price, so it’s safe to say you’ll have plenty of replacements on hand. Or if you’re looking to buy a large number of them for friends, employees, or students, well this is a great option too. Unlike the last two styluses, however, these don’t feature a precision ballpoint tip for writing. Still, these styluses will certainly get the job done for a number of other uses, such as scrolling through your Facebook feed, typing out tweets, reading a book, or simply to protect your touch screen device from fingerprints when in use. They’re also great for increasing sensitivity for your devices for a much more enjoyable (and far less frustrating) touchscreen experience. The stylus itself is made of lightweight aluminum with a soft rubber tip — both of which are durable and long-lasting. They’re compatible with virtually any touch screen device, and they come in a variety of metallic, eye-popping colors that are certainly desirable from a stylistic standpoint. 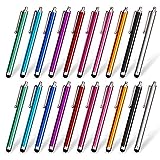