For the last six months, Verizon was doing well. It introduced an excellent Unlimited data plan with minimal restrictions and an affordable price, and subscribers fell over themselves to sign up.

Well, that’s all out the window. This morning, Verizon made some significant changes to its Unlimited plan that makes it more expensive and worse, and it’s started throttling all smartphone video — on any plan, regardless of price — to 720p.

We’ll come back to the plans and Verizon’s need for a new dictionary in a moment, but first, let’s talk about why Verizon had to make these changes in the first place. Simply put, I don’t think Verizon’s network can keep up.

According to data put out by two testing companies — OpenSignal and Ookla (the company behind Speedtest.net) — Verizon’s average network speed has slowed since the introduction of unlimited data plans. The drop in speed is a few percentage points overall, but the problem is probably more related to congestion at popular spots during peak times. If everyone is streaming video over the network while waiting at the airport, for example, that’s going to put the crunch on the network.

Now, that’s just speculation, because it’s surprisingly difficult to get good data on mobile networks, thanks to the massive size, complexity, and difficulty of testing. Add to that the fact that networks actually pay testing companies for the “awards” that they hand out every few months, and you understand why it’s difficult to take anything at face value. 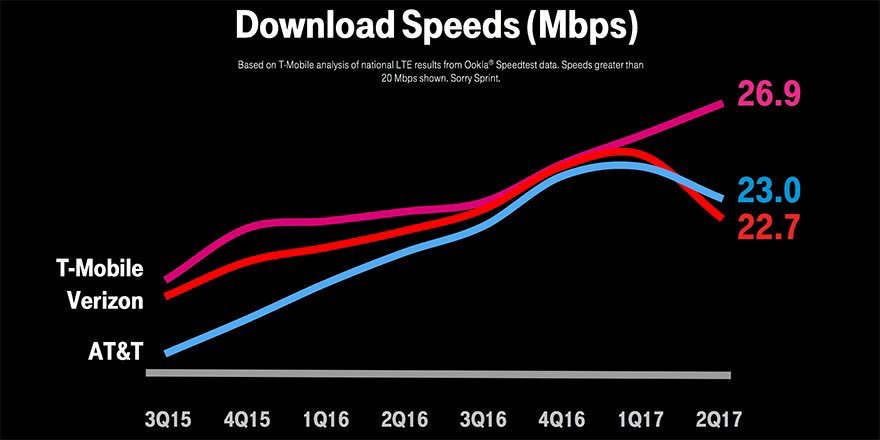 OpenSignal and Ookla are both paid by T-Mobile (for the rights to publish data, not for the testing itself), and both use crowdsourced testing that relies on speedtests run through apps on users’ smartphones. That makes it difficult to scientifically control the data, but it does have the advantage of a huge sample size and more real-time results.

Verizon, on the other hand, prefers to point to RootMetrics, a company that conducts drive testing to evaluate network performance. Verizon’s director of corporate communications, Kelly Crummey, said that “Eight times in a row RootMetrics has declared Verizon the “undisputed leader” for overall network coverage and reliability. That’s eight straight times Verizon has been named #1. And speed? We’ve won that the past seven times in a row.”

Now, as I said, proving that Verizon’s network has been slowed down by Unlimited is impossible if you don’t work at Verizon — and its executives are saying the opposite. Mike Haberman, Verizon’s VP of network support, told me that the data from Ookla and OpenSignal “doesn’t line up at all with what I see,” said that congestion “is not an issue” for Verizon, and that the network is “stronger than ever.”

But if that’s the case, why would Verizon put so many restrictions on its flagship plan? The introduction of Verizon’s Unlimited plan — which only stood out from the competition because of the 10GB hotspot allowance and HD video! — saw great results for Verizon, with thousands of new customers signing up and Verizon having an extremely strong Q2 as a result. Verizon specifically cited the introduction of Unlimited plans as the reason why the company saw 356,000 new phone lines added in Q2, versus 86,000 a year before.

Having a good unlimited plan was doing wonders for Verizon’s bottom line. So the only reasonable explanation I can see for throttling video to 1080p — even on the most expensive plan — is that it was causing problems for the network. Verizon’s only rationale for the changes today is “We are offering choices on unlimited now because everyone deserves to experience unlimited on America’s best wireless network” — which is a nice way of completely avoiding the question.

This isn’t a made-up controversy, by the way. Customers are already mad about the changes on social media, and Verizon retail employees — the people who have to sell the plans — are furious. One said to me “read this on the way to work, realized this entire week is going to suck.” Another simply said “Welp. There goes my commission.”

Sherrif Hanna, a technical marketer for Qualcomm (which makes a lot of the equipment used in Verizon’s network) didn’t pull any punches either:

Of course, T-Mobile’s John Legere was quick to pile on:

Now, every network, including T-Mobile, strains the definition of “Unlimited,” and most include some kind of throttling and usage cap. T-Mobile’s basic unlimited plan, T-Mobile One, also includes caps on video quality and hotpost usage. You have to spend a couple extra bucks on an add-on to get HD video and a usable mobile hotspot allowance.

But Verizon’s gone about the changes in a bad way. Existing customers will be subject to the video throttling, even including much older customers on the grandfathered unlimited plan. Verizon says that there’s no real visible difference in quality between 720p video and anything higher when you’re watching it on a phone, which must be why so many people are spending $800 on top-end Android devices with 1440p displays — it’s because they can’t tell the difference.

In short: no-one begrudges a network taking steps to address congestion and keep speeds usable and fast for everyone. But Verizon’s gone about this in the wrong way, by not being open about the changes, and forcing them on existing customers overnight.

It’s exactly this kind of strong-arm, technically-legal-but-really-a-sleazy-move kinda thing that makes people hate telecoms companies in the first place — and it’s the reason why people actually like T-Mobile, despite its prices being nearly the same and the CEO having a penchant for awful onesies. Until Verizon buckles down and starts being transparent, the Uncarrier is going to keep whooping its ass.