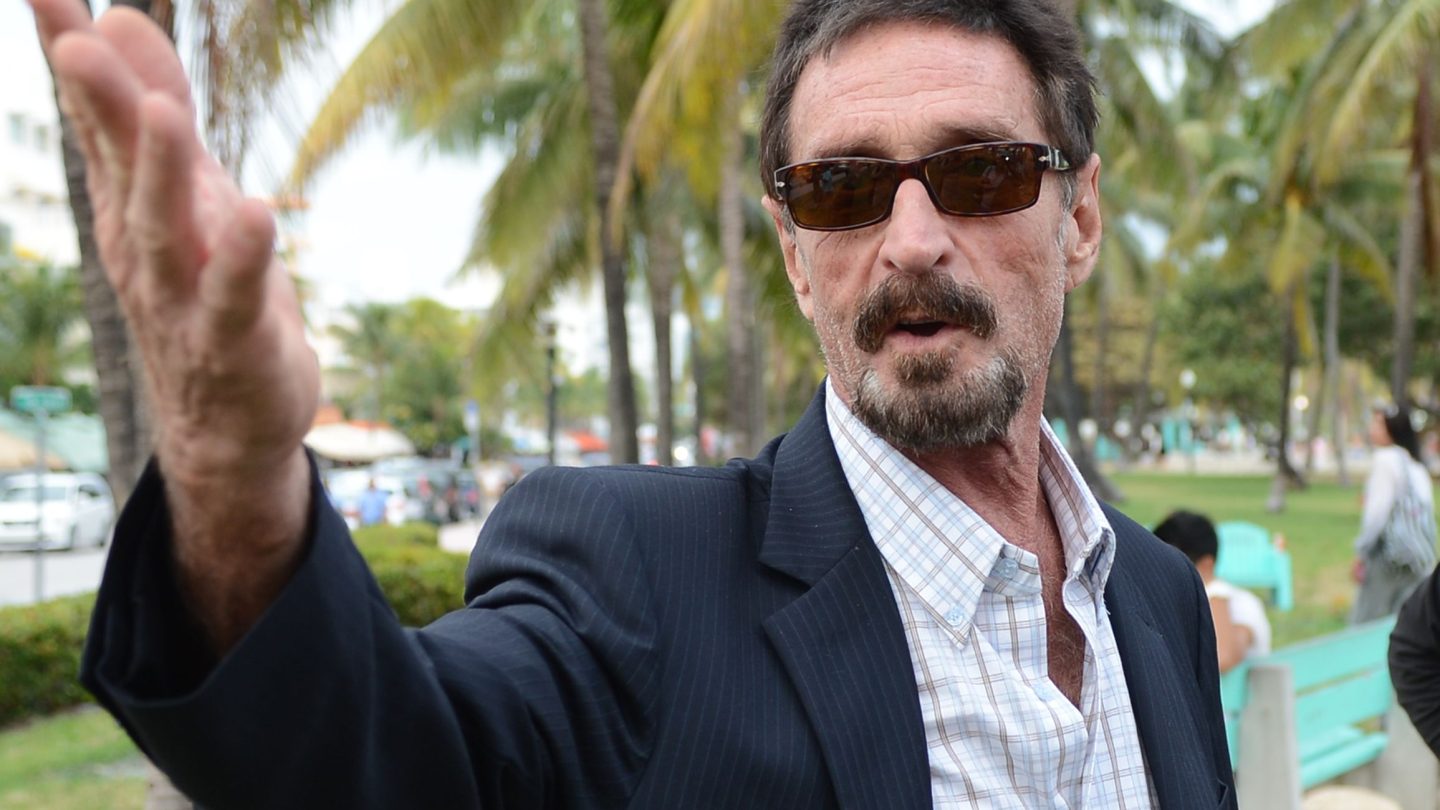 “Come dressed as a woman.”

That was the weird and very John McAfee-like instruction that the controversial entrepreneur gave me a few years ago, after I’d requested an interview by reaching out via one of his official, verified accounts online. This was back in 2015, once he’d resurfaced in the US after fleeing a murder investigation in Belize. I’d heard that the brash, bombastic antivirus software pioneer — who’d been making global headlines at the time — was laying low in a small town, just a few hours’ drive from me in Tennessee. I reached out, expecting nothing to come of it.

I was surprised when my cell rang that night — surprised that he actually called me, even though I’d left my number and he’d said he would call. I don’t know, I assumed that hiding out from the shadowy hit squad he claimed was after him, while also trying to avoid the authorities that he always lamented were railroading him, would keep him, you know, too busy to talk to me. But he not only said I could interview him. He even offered to let me come do it in person, in the backwoods home where he was hiding out.

His only stipulation was that I come dressed as a woman.

He got a kick out of that one, a condition he stipulated in that deep, theatrical baritone of his.

It was a joke, but it also seemed illustrative, in its way, of the brilliant yet at-times very strange figure who’d go on to launch a quixotic bid for the presidency as a Libertarian, and who also in recent years become involved with cryptocurrency and various business interests before — yes, he vanished again, this time on the run from US authorities.

John and I didn’t talk too long that first night. Here’s what I ended up writing about him. We had other conversations after that, but I was reminded of that initial exchange when word began to circulate Wednesday afternoon that the 75-year-old McAfee was found dead in his Barcelona prison cell — his death having been confirmed by Spanish news reports (in at least two publications there, El Mundo as well as El Pais) and also via a spokesperson for the Catalan Justice Department, who confirmed the death to Reuters. McAfee’s lawyer told Reuters that he hung himself in prison, the same day that a court in Spain authorized his extradition to the US to face tax evasion charges here.

Other journalists will write more comprehensively, more authoritatively about his life. I don’t claim any unique insights, other than that he could be the most persuasive, the most articulate expert when talking about certain subjects. Like data privacy. In one of our conversations, he blasted the Apple Watch as a privacy “nightmare.”

“Game apps are the worst,” he once told me. “They’re developed by a few people, most of the time we don’t even know who they are, and they end up with 100 million users. And virtually all apps that are free ask for excessive permissions. Why? Because nothing in life is free. If they’re giving it to you for free, they’re collecting your information. The vast minority only use what they need. If you don’t need an app, don’t download it.”

My impressions of John, as I alluded to above, were that he also rather enjoyed being provocative. His “Uninstall” video that he filmed a few years ago is a good example. This was a pretty bonkers clip that he uploaded to YouTube, in which he joked about how difficult it is to uninstall McAfee antivirus software, while beautiful women, some scantily clad, hovered around him.

The time John put a loaded Smith & Wesson to his head in front of a Wired reporter also comes to mind.

When I was writing my piece about him, I asked him at one point for a photo, thinking I’d get something pretty standard. A headshot, maybe, or something professional — I don’t know, certainly not anything like what he ended up texting me. It was a somewhat grainy image of the man shirtless, while he seemed to be holding what looked like a lamb that was standing on a table in a kitchen. And there was a scope of some kind resting on top of the lamb.

I didn’t send the photo to my editor.

There is, of course, another side to John. Multiple sides, in fact. He once lived the high life in Silicon Valley. Launching McAfee Associates in the 1980s, and building the software to fight the first computer viruses, earned him a fortune. Over the years, though, something changed. Or maybe it was always there. “One never knows what the future holds,” he mused aloud during my first conversation with him. And he had as good a reason to believe that as anybody. He’d gone from a life of staggering wealth to living somewhat under the radar — in a state whose House of Representatives had just voted to make the Bible the state’s official book.

“Bad people are still after me,” he warned me, a reference to the situation in Belize. He’d been accused of murder there and went to extraordinary lengths to escape. There’s a documentary that tells that story — Gringo: The Dangerous Life of John McAfee.

NSA whistleblower Edward Snowden shared the news of John’s death to his own Twitter account Wednesday, speculating about whether Julian Assange “could be next” —

Europe should not extradite those accused of non-violent crimes to a court system so unfair—and prison system so cruel—that native-born defendants would rather die than become subject to it. Julian Assange could be next.

Until the system is reformed, a moratorium should remain. https://t.co/tUociySmVy

Whatever you want to say about the man, here’s at least one thing that’s incontrovertible: There probably will never again be someone even remotely comparable. The same year I met him, a few months prior, he’d shown Fox Business network anchor Stuart Varney — who sat watching, helpless — how effortlessly he could hack Varney’s phone. Live, on air. He was also giving high-profile keynotes around the same time, like one in Las Vegas at the National Association of Broadcasters annual conference, warning attendees about the privacy tradeoff people make with smartphones.

The following year, I called John again on a particular night that I definitely remember, because it was the same night as one of the three presidential debates between Donald Trump and Hillary Clinton. Matter of fact, it was while one of those debates was actually taking place, while we were talking. I asked if he happened to be watching, and he harrumphed. “Why would I want to watch such a thing?” he asked me.

Except for a retweet, the following seems to be the final tweet written from his official Twitter account, the bio of which describes him as an “iconoclast” and “Lover of women, adventure and mystery” —

In a democracy, power is given not taken.

But it is still power.

Love, compassion, caring have no use for it. But it is fuel for greed, hostility,  jealousy…

Take care which powers you allow a democracy to wield.

In keeping with the conspiratorial nature that dominated so much of his online and offline persona in recent years, however, the final post on his official Instagram account (which no longer seems accessible, as of the time of this writing), was an image of a single letter of the alphabet. It was posted late Wednesday afternoon after word of his death had already begun to circulate, and conspiracy theorists instantly had a field day with it.