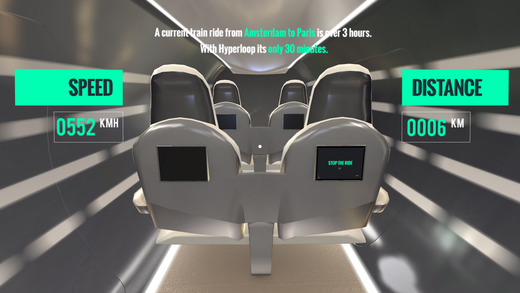 I’ve seen Tomorrowland, so I know that the future is supposed to be full of flying cars and jetpacks. Elon Musk’s version of the future is a little less fanciful — it only involves levitating people through a partial vacuum at hundreds of miles an hour. But if this VR app that lets you try the Hyperloop experience is accurate, Musk’s future won’t be particularly exciting.

To support its Hyperloop pod design bid, the Delft University of Technology had an ad agency make an app that explains how Hyperloop and lets users virtually try out a Hyperloop trip. It’s whatever you call the polar opposite of a wild ride.

The app is available for iOS or Android. In addition to an explainer of Hyperloop technology and how it works, it lets you try a simulated journey from Paris to Amsterdam. Only, it could be a simulated journey from North Dakota to South Dakota for all I care. You sit in a small pod, watch the miles tick away (quite quickly) and stare at the inside of the pod. In case the app doesn’t work, you can replicate the experience by sitting in a room with a flickering tube light and a kitchen timer.

Of course, Hyperloop isn’t supposed to be a rollercoaster ride. The main benefit is speed and simplicity, and while loop-the-loops would certainly add to the entertainment value, the G-force would probably make you pass out.

While Hyperloop is looking promising from a technology standpoint, its adoption in the US still isn’t looking all that likely. The same problems that have prevented the rollout of highspeed trains still apply to Hyperloop, mostly that it’s difficult and expensive to build a completely straight track between two cities.