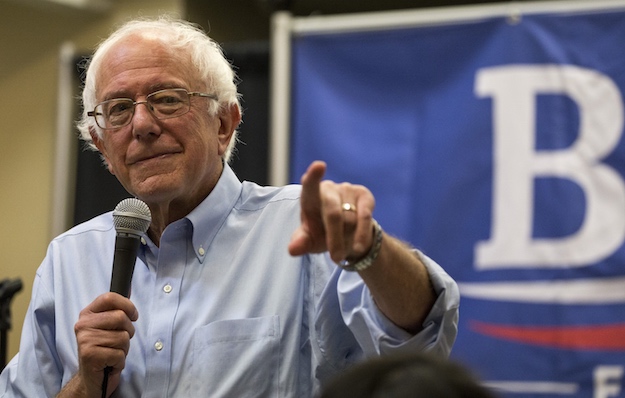 Earlier in the year, we bore witness to Donald Trump exclaiming that if he gets elected, he will make sure that Apple “builds their damn computers” in the good ole’ U.S. of A. And now we have Bernie Sanders, a candidate you could rightfully describe as the polar opposite of Trump in every meaningful way, effectively championing the same cause. As the old saying goes, politics makes strange bedfellows.

During a recent interview with the New York Daily News – which just so happened to coincide with Apple’s 40th anniversary – Sanders was asked, point-blank, whether or not Apple is destroying the fabric of America. A bizarre question, to be sure, but keep in mind that Sanders isn’t exactly the biggest fan of corporate America.

“No, Apple is not destroying the fabric of America,” Sanders responded. “But I do wish they’d be manufacturing some of their devices, here, in the United States rather than in China. And I do wish that they would not be trying to avoid paying their fair share of taxes.”

As a quick aside, Sanders wasn’t shy about stating that “JPMorgan Chase and virtually every other major bank in this country” are actively destroying the national fabric of the United States.

With respect to Sanders’ comments on Apple, we should point out that Apple does in fact have manufacturing facilities here in the U.S. The 2013 Mac Pro, you might rememeber, was manufactured exclusively in the United States, in Austin, Texas to be exact. But when it comes to manufacturing a truly global device like the iPhone, politicians like Trump and Sanders don’t seem to have a firm grasp on the economic factors that shape the mass production of consumer electronics.

The idea that Apple could manufacture more than 100 million iOS devices every year here in the United States is certainly ideal, but the reality is that existing U.S. factories simply aren’t built for that level and scale of specialized production.

In stark contrast, manufacturing companies in China, with Foxconn being a prime example, are specifically tailored towards churning out hundreds of millions of consumer electronics devices. While the Foxconn name is often mentioned alongside Apple, it’s important to remember that every major tech company you can think of is an important Foxconn customer, including Amazon, Dell, Google, HP, Microsoft, Sony and Nokia.

But more importantly, Foxconn has thousands of employees that are well-versed in all aspects of the manufacturing process. And as we’ve mentioned before, many of these employees possess specialized and unique skills that aren’t as easy to find in the United States.

The following excerpt from a 2012 New York Times article on the topic still rings true today:

The entire supply chain is in China now,” said another former high-ranking Apple executive. “You need a thousand rubber gaskets? That’s the factory next door. You need a million screws? That factory is a block away. You need that screw made a little bit different? It will take three hours.”

Now as for Sanders’ contention that Apple should pay their fair share of taxes, well, that’s an entirely different beast. It’s of course no secret that Apple’s complex tax schemes abroad have been called into question before. The fact of the matter is that Apple does in fact pay tax on every single dollar it earns and that the company’s tax wheelings and dealings abroad all operate within the confines of the law and are expressly designed to minimize the company’s tax liability. As others have opined, the problem here isn’t so much Apple as it is the inherent loopholes being exploited in the tax code.

It’s also worth noting that Apple has never, nor has it ever been accused of, diverting any money earned in the United States to offshore tax havens.

During a 60 Minutes profile on Cook that aired this past December, the Apple CEO was visibly displeased when asked about the notion that Apple is illegally avoiding paying its taxes in full.

“Apple pays every tax dollar we owe,” Cook said, while also adding that the notion of Apple being engaged in tax avoidance is “political crap.” The root of the problem, Cook later explained to Charlie Rose, is an antiquated tax code.

“This is a tax code, Charlie, that was made for the industrial age, not the digital age,” Cook said. “It’s backwards. It’s awful for America. It should have been fixed many years ago. It’s past time to get it done.”