Best Portable DVD Player for Your Next Road Trip

If you’re like most of us, you had a small to decently sized DVD collection. Purchasing movies was the best way to guarantee you’d be able to watch your favorite films forever. But once streaming services and on demand movies became popular, the need for VHS tapes and DVDs started to dwindle out. Going to a video store and renting a movie wasn’t a thing anymore. But if you still have your DVD collection, since you spent a pretty penny on building it, you probably didn’t throw them away. If you’re heading on a road trip and want to bring along some of your favorite films, you’ll need a device to play them on. With a portable DVD player, you’ll be able to dig up those discs and bring them with your on your trip. For a trip down memory lane, using any of the three handpicked portable DVD players below will make for a fun time, no matter where you’re heading to.

Obviously, you won’t be able to bring a huge television with you whenever you need to watch a DVD, but if you’re looking for a quality size to view, the DBPOWER 12″ Portable DVD Player is a solid option. Giving you the ability to watch from anywhere, this contains a five-hour rechargeable, 2,500 mAh lithium battery to give you the real portable aspect. But it also includes a 1.8-meter car charger cable and an AC power adapter, so you can watch from the car or near an outlet for limitless enjoyment. It supports direct play of CD, DVD, CD-R/RW, DVD -R/+R, DVD+RW/-RW, VCD, SVCD but it does not supports Blu-Ray discs. It supports max 32 GB USB and SD cards for playing MP3/WMA/WAV, JPEG, MPEG2/AVI/DVIX. You can also use this as a regular DVD player, as you can plug this into a TV and display it onto a TV screen. You can also plug this into another DVD player, so two different people can be watching the same film on two separate screens. This features a 10″ swivel screen, allowing you to configure the display how it best works for you. This can also be attached to a car’s headrest, as it can be rotated 270° or even 180°. You won’t have to start the movie over again, as it has a break-point memory function. 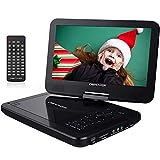 Making those long viewing sessions more tolerable for your eyes, the ieGeek 11.5″ Portable DVD Player was made for the long haul. This player adopts the HD Eye-protective screen and refuses a recycled screen. This aims to alleviate eye fatigue caused by long use and more protective and comfortable for your kids’ eyes. The compact design of the player makes it easy to bring with you to and from anywhere you’re traveling. You can share this with another screen by connecting them with an AV cable and it can also swivel to be placed on a car’s headrest. If you utilize that feature, it will possible eliminate eye fatigue and neck strain altogether. This also has a five-hour rechargeable battery with the abilities to be charged in the car or at an outlet. The player has two built-in speakers and there’s also a 3.5mm earphone jack for keeping the sound concentrated. It supports CD, DVD, DVD+R(-R), DVD+RW(-RW), VCD, SVCD-R(RW), CD-R(RW) from 6 regions as well as multimedia files from USB and SD Card (16-32GB), such as VOB, AVI, MPEG, MP3, WMA, JPEG. 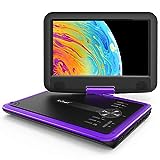 For the easiest time when it comes to bringing a DVD player to and from places, the APEMAN 7.5″ Portable DVD Player is a solid option for you and your family. This measures as a 7.5″ inch diagonal screen and only weighs 2.77 pounds, making it so simple to put in your bag or jacket and bring it with you. The control panel is composed of high quality aluminum buttons and it also comes with a remote control to operate it easier. Similar to the previous two, it comes with the cords to charge and display and share. It can swivel 270° and rotate 180°, while you can watch DVDs for four straight hours before having to recharge the button. This also has a game function, as there is a game USB function for game joysticks, so you can play games for extra entertainment. 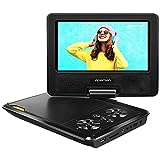