Japan’s Hayabusa2 asteroid probe has been in orbit around the space rock known as Ryugu for months now, and in February it attempted its most complicated maneuver yet. The spacecraft fired a projectile into the surface of the asteroid and snagged some samples which it will eventually attempt to deliver to Earth, but it mission was far from over.

Now, less than two months later, Japan’s space group JAXA has cleared the probe to attempt another sample-gathering maneuver, requiring that the spacecraft use an explosive device to launch a projectile at the rock’s surface. Hayabusa2’s handlers back on Earth say that it appears the probe and its impactor did their jobs, and they have a photo as proof.

Gathering a sample of an asteroid is tricky, especially with a space rock as debris-covered as Ryugu. To make things a little bit easier, JAXA designed the probe with instruments called “Small Carry-on Impactors” (SCIs).

The impactors function like one-shot cannons, with the spacecraft releasing the impactor in space above Ryugu’s surface and then retreating to a safe distance. The impactor then fires an explosive charge, blasting a solid bullet-like projectile into the rock and blasting away some of the surface debris. 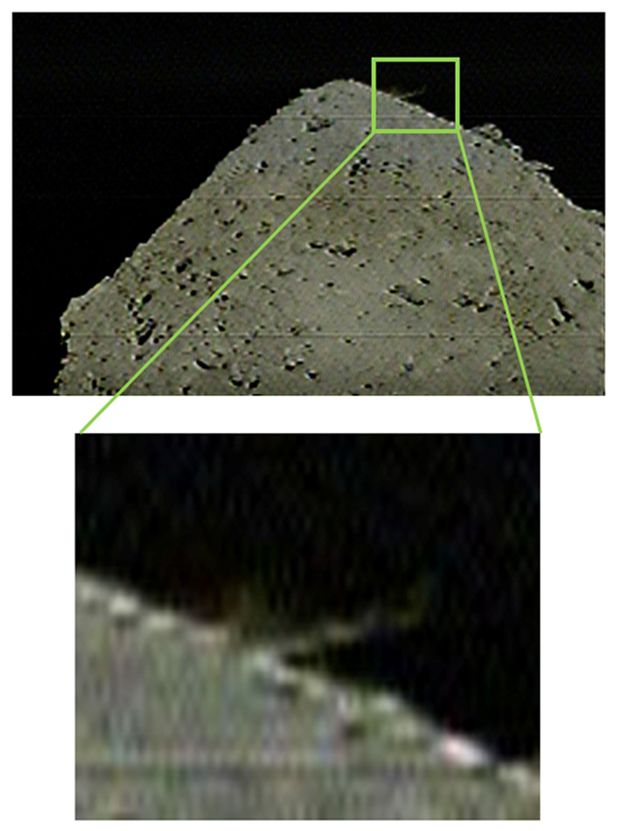 This step is vital to the mission’s goal of sampling the material the asteroid is made up of, rather than just catching some of the dust from its outer layer. This time around, the blast was caught on camera and you can clearly see a plume of dust and debris being pushed out from what we expect is a newly-formed crater.

Because the debris could damage the spacecraft if it’s too close, JAXA will now wait a few weeks for things to calm down before returning to the crater and sending Hayabusa2 to its surface to perform a touch-and-go sample collection maneuver.

Eventually, the spacecraft will return home with these and others samples which could help scientists better understand how asteroids form and where they originate.

Tweet
NASA’s asteroid probe shot Bennu with a laser, and this is the result