Sorry Porsche, Tesla has the highest customer satisfaction ranking in the auto industry

Whenever Tesla comes up in conversation, things can quickly become heated. While Tesla enthusiasts are always eager to list the myriad of reasons why Tesla vehicles are revolutionary and amazing, there are no shortage of Tesla contrarians who are quick to point out why Tesla is the most overrated car company in history. All that aside, the real litmus test for determining how car companies stack up is to take a look at customer satisfaction. And with that metric in mind, Tesla is once again the top ranking car brand according to Consumer Reports.

Over the course of the last year, Consumer Reports compiled data taken from thousands of car owners. Specifically, respondents were asked whether or not they would buy their current car model once again. They were also asked about specific details, such as the driving experience and the overall value of their purchase.

When the dust settled, Tesla emerged as the clear-cut winner with an owner satisfaction score of 90. Note that the score encapsulates data from across all Tesla models. Following close behind with a score of 85, Porsche occupied the second spot. The rest of the top 5 includes Genesis (Hyundai’s luxury arm) with a score of 81, Chrysler with a score of 78, and Audi with a score of 76.

“A familiar theme is that cars that meet owner expectations consistently score well,” CR notes. “Sports cars like the Porsche 911, Chevrolet Corvette, and Mazda MX-5 Miata are hits because they deliver the driving fun that their owners were looking for.”

The car brands that scored the worst include Acura, Nissan, and Accura which all earned a score of 58. The full list can be viewed over here, with the top 15 illustrated below. 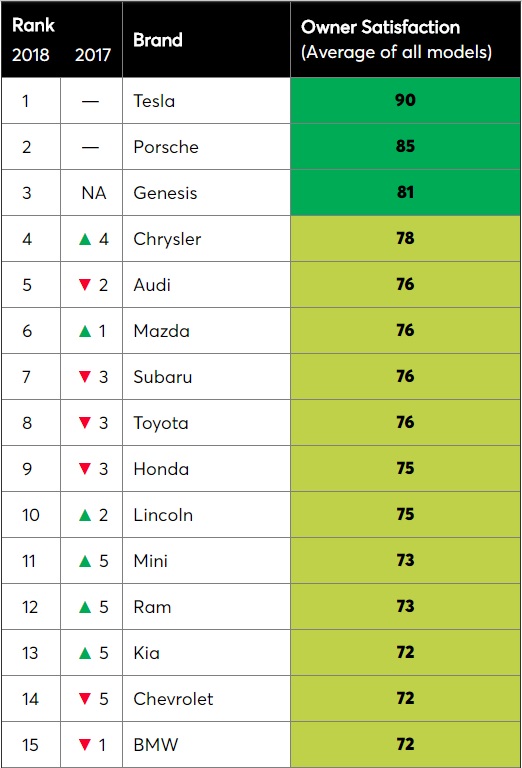