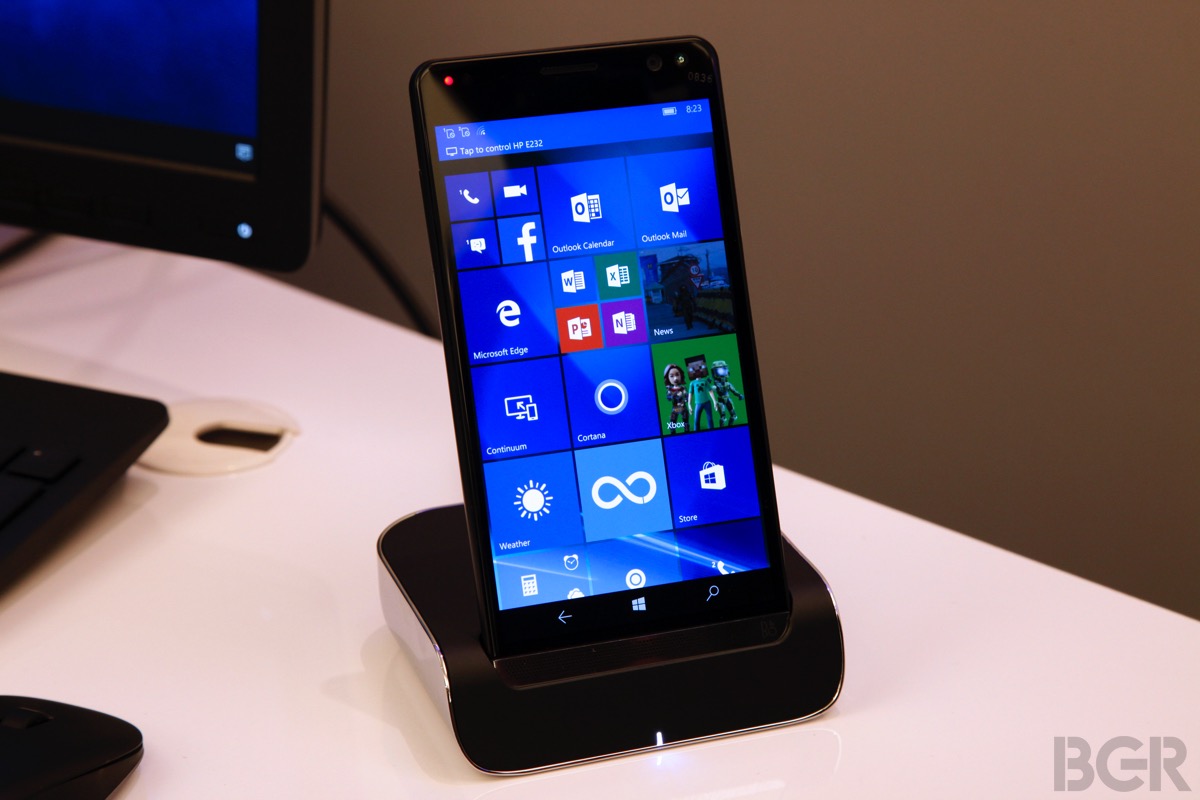 It would be difficult to argue that HP’s $1.2 billion acquisition of Palm back in 2010 was anything but a disaster. The company’s webOS phones fizzled in the blink of an eye and HP would ultimately go on to write off $3.3 billion as a result of the deal. It has since sold off the patents and operating system it acquired when it took over Palm, and the company’s mobile business has all but evaporated.

But every end leads to a new beginning, and now HP is reentering the smartphone market with a product that’s unlike anything you’ve seen before.

Meet the HP Elite x3, a smartphone that HP believes may ultimately kill off smartphones as we know them.

As HP investigated how best to reenter the mobile market, the company came to two very important realizations. First, it had to address major pain points if it hoped to differentiate itself. But equally important was the acknowledgement that the consumer market likely isn’t the best place for HP to operate right now.

The result is a smartphone that no longer fits into the smartphone category. Instead, it’s a mobile device, a notebook computer and a desktop PC in one.

In your hand, the Elite x3 is a powerful 6-inch phablet with a premium graphite housing and cutting-edge specs. Connected with a USB-C cable or wirelessly to HP’s Mobile Extender accessory, the x3 is instantly transformed into a 12.5-inch ultrabook. And when seated in the HP Desk Dock, it’s a full-fledged Windows 10 PC.

“Commercial mobility is prime for disruption, and has never seen innovation at this scale” HP CEO Dion Weisler said. “The HP Elite x3 is a revolutionary mobile platform that enables mobility and computing to come together in a truly meaningful way. Together with the strength of our partners, we’re propelling the industry forward and turning the promise of mobile productivity into a reality for customers.”

In Windows 10, HP saw a real opportunity to address three enterprise pain points — and make no mistake, HP is doing everything it can to convey that this is a device aimed at the enterprise, not at consumers.

First, people have too much to carry with them. Next, IT managers have too difficult a time ensuring all company data is secure across the many different computing platforms they’re obligated to manage. And finally, desktop apps are a pain to use on mobile devices like smartphones and tablets.

And so the HP Elite x3 was born.

With the x3, IT managers have a single device to manage and workers have just one device they need to carry. “The one device that’s every device,” as HP said during private meetings ahead of Sunday’s announcement. And such a device is only now a possibility because mobile processors have grown so powerful, and because Wi-Fi and LTE data speeds have become so fast.

The experience is enabled by Windows 10 and Microsoft’s Continuum solution, which allows a single Windows 10 installation to effectively morph to fit any size screen.

Rather than trying to squeeze a desktop experience onto a tablet or manipulate a mobile operating system so that it’s usable on a desktop, Windows 10 adapts to best fit the screen on which it is running. On the Elite x3 itself, users will navigate the typical Windows 10 Mobile interface. But on the Mobile Extender laptop or when docked in the Desk Dock and connected to a monitor, they will see Windows 10 as is appears on a PC and they will be able to run PC software.

Of course, the very software that enables this adaptive experience is also one of the Elite x3’s biggest drawbacks. Simply put, people don’t want Windows on their phones.

It’s quite clear that the HP Elite x3 is an enterprise play, but “enterprise users” aren’t some separate breed of people who are all work and no play. They don’t want to be cut off from the rest of the world. That’s why BlackBerry collapsed and Windows Phone never went anywhere.

In many cases, using a handset powered by Windows means that a person will not have access to the same apps that all of their friends and family use. They often won’t be able to play the same games, use the same services or communicate with the same new messaging apps that everyone with an iPhone or an Android phone is using. They will often find themselves disconnected in a world that is all about connections.

It’s a big hurdle to overcome, but HP has built an exciting device in its effort to overcome it. The Elite x3 is quite a powerful device as well, with specs that include a Qualcomm Snapdragon 820 chipset, 4GB of LPDDR4 RAM, 64GB of internal storage plus microSDXC support up to 2TB, dual front speakers with Bang & Olufsen sound, a 6-inch AMOLED display with quad HD resolution and a gigantic 4,150 mAh battery.

And beyond all the standard security features an IT manager would expect on a Windows 10 device, the Elite x3 also includes two forms of biometric security: A fingerprint scanner and an iris scanner.

The Elite x3’s full specs can be found on the sheet below (click to enlarge):

HP’s Elite x3 will begin shipping this summer, though exact launch timing and pricing have not yet been announced.

Tweet
LG G5 hands-on: A gorgeous phone that’s unlike anything you’ve seen before