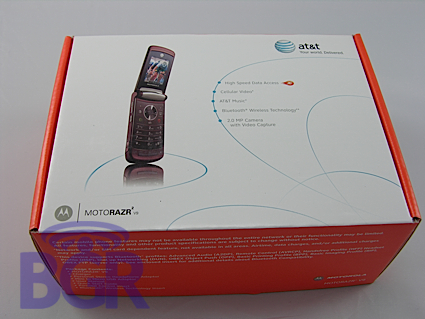 AT&T, where’s the announcement?  Oh well, we’ll rock with it anyway. Now that Sprint, and Verizon have both launched their versions of the phone, it only seems fit that AT&T has came into game. The major difference here is the OS that runs on the RAZR 2 V9 version. It’s the Motorola Synergy OS which is actually pretty old, except for a few minor refinements. The phone does have a 3G radio built right in and performs wonderfully. We also found the voice quality to be better than a RAZR 2 V8. that we also tested on AT&T’s network. We’re having a little issue with the color of AT&T’s version though, and our dream was crushed when we found out the the V9 would not be using the JUIX  MOTOMAXG OS. After all, at this time, MOTOMAXG can’t support 3G, so it does make sense. It’s thin, sleek, eye-catching, and extremely solidly built. What can we say…Welcome back Moto!

Click on over to our Motorola RAZR 2 V9 Unboxing gallery!