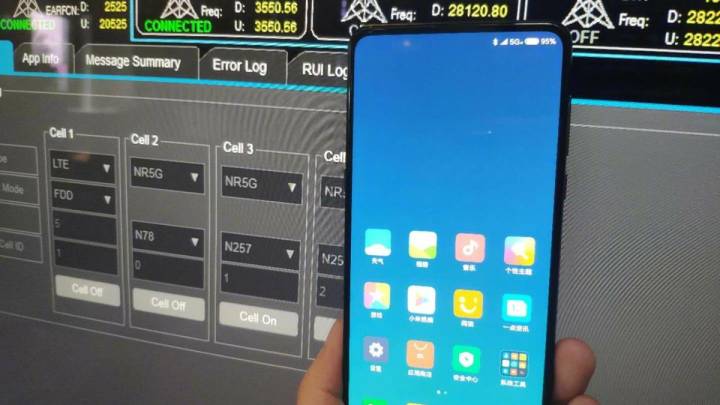 Motorola a few weeks ago unveiled a phone that will get 5G support at some point next year, as long as you’re willing to buy an additional module that will pack the required components to make 5G possible. But the world’s first 5G phone might come from a different Asian company, and it’s shown in the image above. It’s not the usual iPhone X clone that we expect from Android vendors this way, which is surprising, considering that this particular company made its own clones so far.

We’re looking at Chinese handset maker Xiaomi, which posted the image above on Twitter, asking people if anyone noticed anything interesting.

Sharing one more photo. Does anyone see anything interesting? 😎#Xiaomi pic.twitter.com/LjZGibMsuR

It’s not the absence of the notch that you should focus on, but the 5G indicator on the right side of the phone. That’s right, Xiaomi is already teasing that the Mi Mix 3 will have 5G connectivity well ahead of its competitors.

That would be a significant milestone for Xiaomi, but don’t get too excited about it. It’ll be a while until the first 5G networks are turned on around the world. Until then, you won’t really be able to use it.

But Xiaomi does say that when 5G is available next year, download speeds will be more than ten times faster than 4G speeds.

Since you probably noticed there’s no notch at the top of the phone, you may be wondering where the selfie camera is. Well, you’ll have to know that the Mi Mix 3 will be a slider phone, similar to Oppo’s Find X. Yeah, that’s not the ideal form factor for a high-end handset, but it’s one way to kill the notch.

The Mi Mix 3 will be unveiled at some point in October and hit various markets in the months that follow. Unless a competitor comes out with a 5G phone before that, Xiaomi might be able to claim the world’s first 5G phone title.