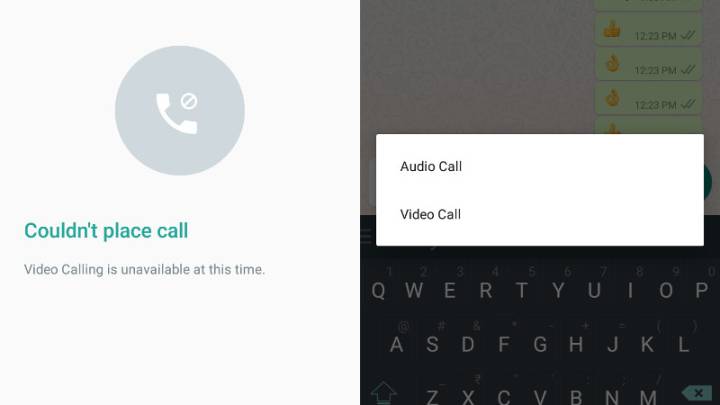 Video calling has been the big capability missing from WhatsApp’s repertoire in the past, but it looks like that is all about to change. Over the weekend, a “Video Calling” option started popping up for beta testers, hinting that a full release of the feature is coming.

This isn’t the first time we’ve heard about video calling coming to WhatsApp. Last year, leaked screenshots showed the feature being tested in a version of the iOS app, and WhatsApp has also been requesting translations for the term “Video Calling,” indicating a worldwide rollout is anticipated for the app’s billion users.

This time around, numerous users of the beta app reported finding a “Video Calling” button in their app. According to Android Authority, users of the WhatsApp for Android beta saw the option to initiate a video call, although the feature itself wasn’t working. WhatsApp removed the option from a later version of the beta app, but it’s a safe bet that the beta users will be the first to get their hands on video calling, since WhatsApp tends to try new features with a smaller sample first.

Video calling would be the latest in a series of moves to bring WhatsApp up to the level of Skype, or Apple’s messaging services. Last year, it rolled out universal voice calling, and last week, we got desktop apps to bring WhatsApp to more devices. Video calling is the final frontier to make WhatsApp a one-stop messaging shop — and hey, if it can crack the code and make video calling that doesn’t drop every ten minutes, it could be a true winner.