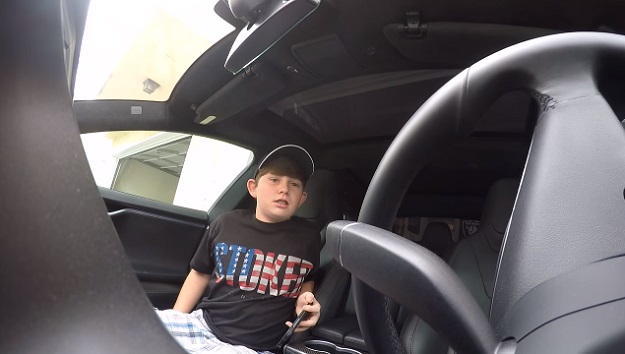 Shortly after introducing its innovative Autopilot software to the world, Tesla, as it’s prone to do, issued a software update for the Model S which included a new ‘Summon’ feature. As the name implies, the feature allows owners to summon their car even when they’re not inside it. When activated, a Tesla will autostart, open up a user’s garage door if need be, and slowly roll out to greet the driver.

And though not in the release notes, Summon also makes for a great prank on unsuspecting passengers. Case in point: a father recently decided to have a bit of fun with his son and slyly equipped his Model S with a hidden Go Pro camera on the dashboard. With his son preoccupied and completely engrossed in his phone, the dad activates Summon and the car begins to move and steer by itself.

Predictably, the kid freaks out as the car begins moving, seemingly with a mind of its own.

Now of course, some folks have been quick to call the video fake, pointing out that the kid looks at the camera. Some also feel that the line, “Dad is gonna kill me!” seems too staged and rehearsed.

Call me crazy, but I think the video is legit. The GoPro camera is positioned right near the steering wheel so the kid is probably just looking in that direction and wondering what in the world is happening. And while some people are quick to note that Internet goers are primed to believe anything, one could just as easily counter that Internet goers are inclined to view everything as fake and staged right off the bat.

So what say you, gentle readers? Is the Dad here a legit prankster or have we all been had?