After months of endless construction, Tesla’s gargantuan Gigafactory in Sparks, Nevada welcomed guests and select members of the press for a celebratory grand opening event last week. To be clear, it will still take a few more years before construction on the factory is 100% complete, but Tesla was comfortable enough with the progress it has already made to give the world a bit of a glimpse inside the massive structure.

While the opening of a factory may seem uneventful if not downright boring in a general sense, Tesla’s Gigafactory is anything but ordinary. Aside from being a physically impressive structure, the Gigafactory’s existence in and of itself is plays a crucial role in Tesla’s quest to manufacture more than 500,000 cars per year by 2020. Now in order to get make that dream a reality, Tesla needs a whole lot of batteries; and because no company on earth can handle the level of battery production Tesla needed, the company up and decided to build its own battery factory, a colossal structure appropriately called the Gigafactory.

If all goes according to plan, the Gigafactory will eventually double the current level of global lithium-ion battery production. With the grand opening of the Gigafactory now behind us, we’ve put together a list highlighting some of the more interesting facts surrounding the building itself along with a summary of the resources and logistical efforts that went into its development and construction.

The Gigafactory will be the biggest building in the world

The Gigafactory measures in at 5.5 million square feet, easily making it the biggest building in the world in terms of its physical footprint. The closest building to the Gigafactory is Boeing’s Everett factory in Washington state with a square footage of 4.3 million.

To put the size of the Gigafactory into perspective, the following chart courtesy of Visual Capitalist lays things out clearly. 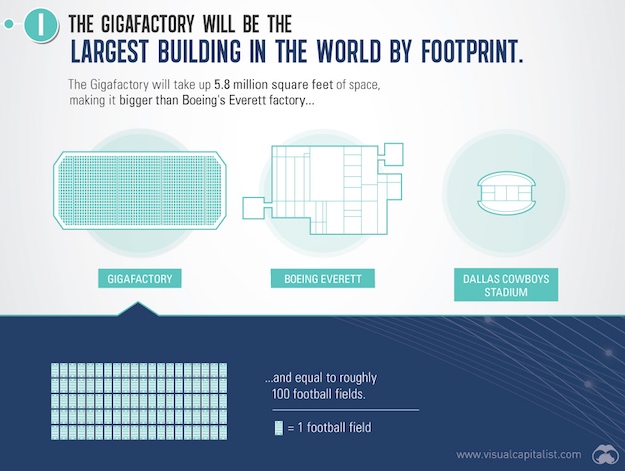 By the time the Gigafactory is 100% finished, it will occupy an approximate area of 13 million square feet.

Now in terms of overall volume, it’s worth noting that the Boeing factory does have the Gigafactory beat as it’s much taller.

The Gigafactory cost $5 billion to construct

When the dust settles, it’s believed that the amount of capital invested into the Gigafactory will come out to a cool $5 billion. Construction began in earnest in mid-May of 2014.

Once the Gigafactory is finished and operating at 100% capacity, Tesla boasts that it will churn out more lithium-ion batteries in one year “than were produced worldwide in 2013.”

Construction workers are on the clock 24/7

Per a recent report in The Wall Street Journal, Tesla now employs 1,000 workers who are on the job “seven days a week on two shifts in an effort to start churning out lithium-ion cells by late 2016.”

The Gigafactory will run on 100% renewable energy

The Gigafactory roof is white for environmental reasons

Tesla, a green company if there ever was one, is planning to outfit the entire Gigafactory roof with solar panels. In turn, the roof of the structure will be painted white in order to better reflect light, keep things cool, and ensure that the solar panels are as efficient as possible.

The building was designed to be earthquake proof

You ever spend a few billion on building a gigantic battery factory only to have an earthquake come along and mess things up? Yeah, Tesla would like to avoid that at all costs. According to a recent report in Fast Company, the massive structure is actually comprised of “four distinct structures with four different foundations so that an earthquake can’t tear it apart.”

The Gigafactory foundation itself costs millions of dollars

The steel structure underlying the Gigafactory itself reportedly cost $15 million.

Fireproofing the Gigafactory cost an estimated $5 million while the electrical infrastructure reportedly set Tesla back $300,000

The Gigafactory won’t run itself, which is why the company anticipates that it will employ upwards of 6,500 at the Gigafactory once construction is fully finished.