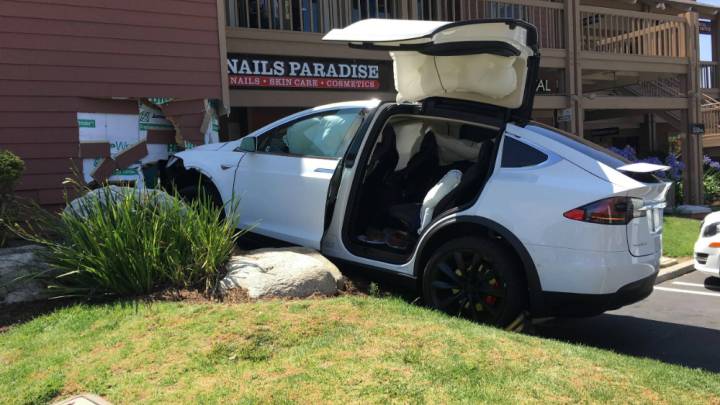 A new Tesla accident made the news over the weekend, with a driver’s newly bought Model X car allegedly having driven itself right into a building – at least according to the owner. But it looks like the car’s autonomous features aren’t to blame for the incident. Instead, it’s the driver who seemingly accelerated into the side of the building, as shown by Tesla’s incredibly detailed logs.

“We analyzed the vehicle logs which confirm that this Model X was operating correctly under manual control and was never in Autopilot or cruise control at the time of the incident or in the minutes before,” the company told Electrek in a statement.

“Data shows that the vehicle was traveling at 6 mph when the accelerator pedal was abruptly increased to 100%. Consistent with the driver’s actions, the vehicle applied torque and accelerated as instructed. Safety is the top priority at Tesla, and we engineer and build our cars with this foremost in mind. We are pleased that the driver is ok and ask our customers to exercise safe behavior when using our vehicles.”

This is the second time Tesla’s logs have explained an accident involving one of its cars. In both cases, Tesla’s software was initially blamed for the crash by the driver involved.

In this most recent case, the owner of the Model X involved with the accident does not agree with Tesla’s findings.

“My wife is a 45-year-old woman with a great driving record. Not and incapacitated driver. She has been going to that center for over 20 years and parking in the same stalls hundreds of times,” the driver told the site. “She knows the difference between brake and accelerator pedal. I am waiting to hear from Tesla whether the accelerator pedal can be depressed by the car electronically similar to gas-powered cars’ pedal being depressed on their own while in cruise control.”

However, Electrek notes that Tesla’s software can tell the difference between acceleration triggered by a pedal press as opposed to the car’s autonomous features.