Late last week, a 1973 job application from Steve Jobs went up for auction at RR Auction. Expected to fetch as much as $50,000 by the time the auction comes to an end this coming Thursday, the application itself provides us with an interesting look at Jobs’ life before he co-founded Apple and helped usher in a number of tech revolutions. Suffice it to say, Steve Jobs back in early 1973 was just an ordinary college student looking for a job.

Before taking a look at the job application, a quick backstory on what Jobs was up to in the early 70s might be helpful. In 1972, Jobs enrolled at Reed College, a liberal arts college in Oregon. Jobs famously didn’t last long there and decided to drop out just one semester in. Jobs, though, did stick around the campus for about 18 more months where he sat in on whatever classes happened to be of interest to him.

As to why he dropped out, Jobs would later explain:

After six months, I couldn’t see the value in it. I had no idea what I wanted to do with my life and no idea how college was going to help me figure it out. And here I was spending all of the money my parents had saved their entire life. So I decided to drop out and trust that it would all work out OK.

With that said, Jobs’ job application provides us with an interesting glimpse into how Jobs viewed himself while still a student. As evidenced below, Jobs noted that he was an English Lit major. More interesting is the ‘Special Abilities’ section where Jobs listed “electronics tech or design engineer.” Jobs also indicated that he had both computer and calculator experience. What’s more, the job application makes quick reference to Jobs’ previous work experience at Hewlett-Packard. 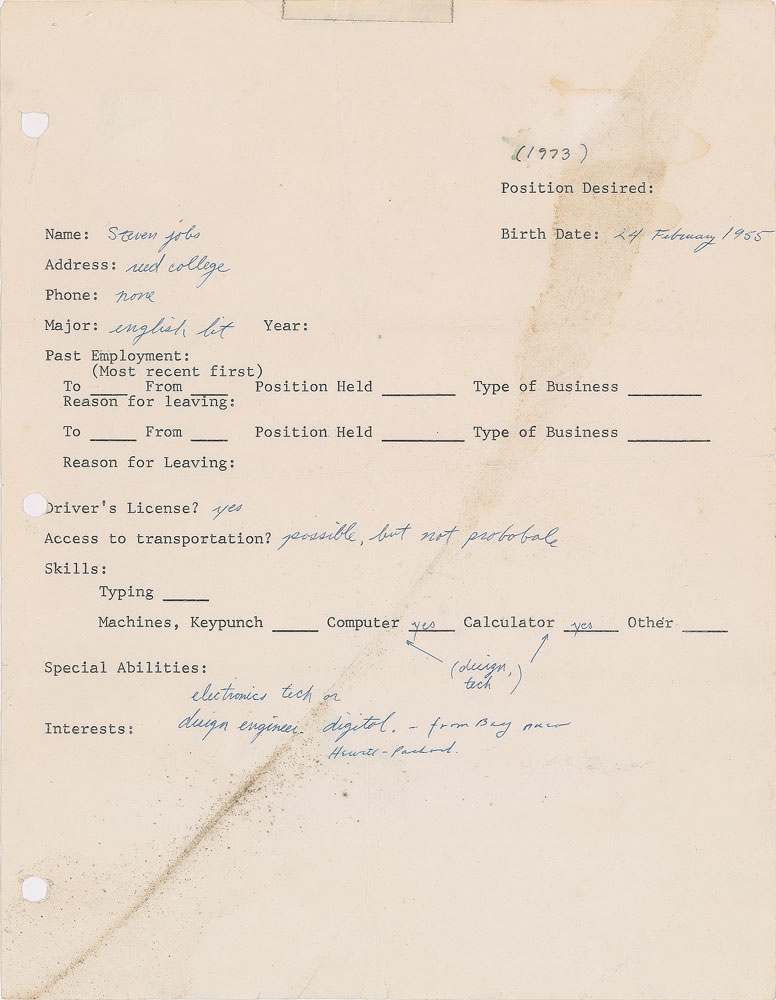 While there’s no indication what type of position Jobs was applying for here, he did begin working at Atari in 1974 with Steve Wozniak. Again, the RR Auction is set to end this Thursday and the current bid for the Jobsian relic stands at a whopping $50,000.