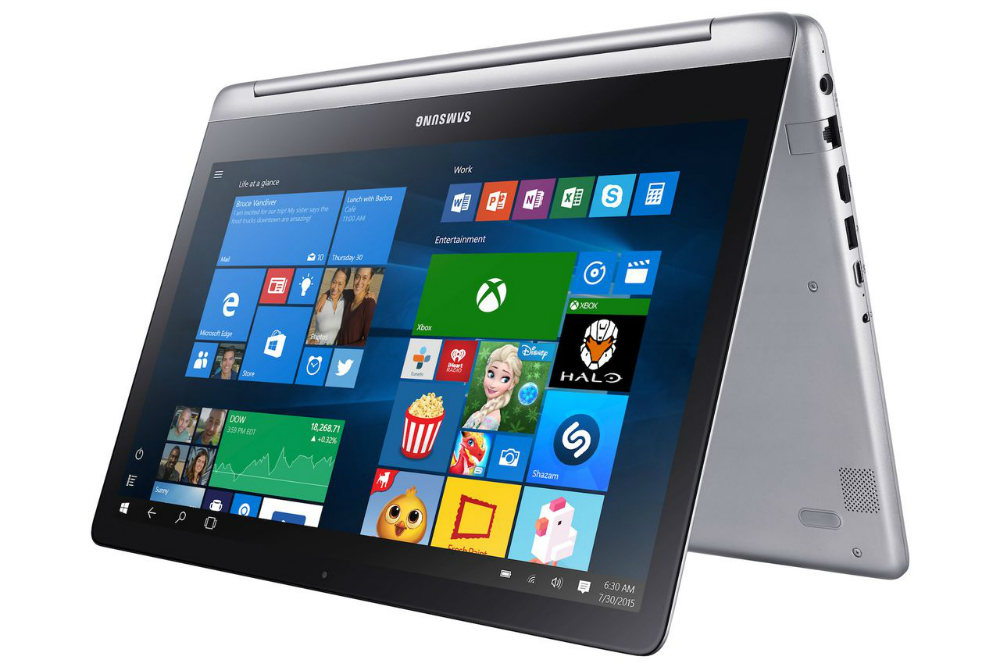 You’d think that a company as big as Samsung would have all it takes to come up with great products from top to bottom, inside and out – Samsung doesn’t control any of the software other than Tizen though, so we’re just talking about hardware design. It turns out it’s still tough for Samsung’s designers to come up with a product that people will want to buy the minute they lay their eyes on it. We’ve touched on this before when looking at the Galaxy S6’s asymmetry last year, and now we’re about to check out the device above, the brand new Notebook 7 Spin.

This is one of Samsung’s newest 2-in-1 convertible laptops, and it starts at $799. It comes in 13.3-inch and 15.6-inch versions that sport Full HD screens with “Video HDR,” up to 16GB of RAM and hard drives up to 128GB SSD (on top of the regular 1TB HDD inside), and fast-charging battery tech. But hardware performance is something you get to experience only after you purchase a device.

A simple look at the Notebook 7 Spin, which The Verge says has a design “reminiscent” of Lenovo’s Yoga line, is all you need to come to appreciate the MacBook’s smooth lines and understand why everyone is trying to copy Apple.

Just look at those ports. And that line that seems to run almost through them. But if that’s not a big deal for you, then just check out that Ethernet port – hint: it’s the middle one above between the charger port and the HDMI port.

You see, even though 2-in-1 devices have been designed to be the best of mobile computing, Samsung seems to think you’d want a wired connection. And to do that, you’d need an Ethernet port. But you also want your 2-in-1 to be as slim as possible, don’t you? This way the device doesn’t become annoying to use while you’re on-the-go. Therefore, you have to open a flap and then insert the Ethernet cable. Samsung apparently hasn’t heard of adapters. Or it’s simply too worried that people won’t want to carry an adapter to risk it. Of course, no one seems to have a problem with the MacBook line’s lack of an Ethernet port.

Let’s move on to the USB-C port that could be used with an Ethernet-to-USB-C adapter. That’s the second-to-last port in the image above, which can be used for faster file transfers (and charging batteries, at least on other devices). Why on Earth is it sticking out? Is there not enough space inside the laptop to perfectly align and conceal it? Does it have to protrude? Let’s look at Apple’s USB-C port:

And I’m not even going to say anything about the ports not being evenly spaced out.

Let’s move on to brand recognition and brand awareness. It’s obvious this is a Samsung tablet/laptop because of that logo. But nobody thought of what happens when you keep the device in the position pictured above. Sure, everyone and their grandmother knows who Samsung is and can read that name even if it’s upside down. Yet it’s still a tiny detail that Samsung’s design team apparently isn’t thinking about. If the screen can be flip around, why stick your logo in a spot where it’ll be upside down half the time?

With all that in mind, I’d take Apple’s design over Samsung;s any day of the week, even if that means I’ll have to ditch floppy disks, DVD drives and all the other ports, including the headphone jack that so many people dread losing.

If design is important to you, then the Notebook 7 Spin probably isn’t the laptop you want.