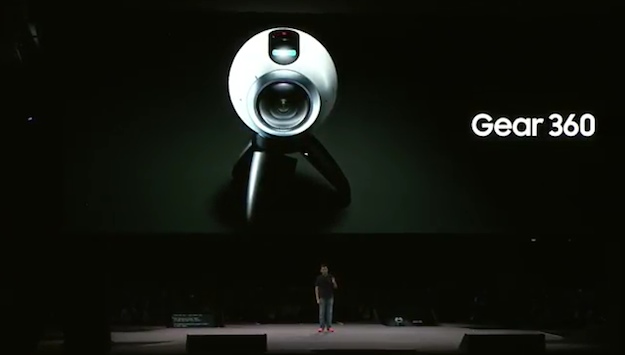 During Samsung’s ‘Unpacked’ media event today, the Korean-based electronics giant introduced a new consumer-oriented camera dubbed the Gear 360. As the name somewhat implies, the camera is capable of capturing immersive 360 degree photos and video with ease. Once footage is recorded, it can easily be shared with friends or saved for later viewing.

Specifically, images and video taken with the Gear 360 can be viewed in 2D either via a mobile smartphone app or, naturally, in full 360 with the Samsung Gear VR. During filming, users will be able to preview footage taken on the Gear 360 in real time, provided that they have a compatible Samsung smartphone, a selection which naturally includes the recently unveiled Galaxy S7 and S7 Edge.

“Samsung continues to push the boundaries of the mobile experience to extend beyond the smartphone,” Samsung executive DJ Koh said in a press release. “On the heels of last year’s Gear VR release, Gear 360 continues to push the limits on immersive content – providing a visual experience that makes capturing and sharing life’s moments even easier.”

What’s particularly impressive about the Gear 360 is that it was designed to be incredibly portable. Smaller than a baseball, the entire device only weighs 153 grams, or about 1/3 of a pound. In other words, the Gear 360 is small and light enough that it can be carried around everywhere you go.

What’s more, Samsung boasts that Gear 360 is extremely durable and versatile. Not only is it dust resistant and water resistant, but the camera is designed to work swimmingly with a tripod and is also compatible with “a wide selection of accessories and mounts currently available on the market.”

Additionally, the Gear 360 can support storage of up to 128 GB with a micro SD card.

Samsung notes that the Gear 360 will be available in select countries sometime between April and June.